Phobos (Ancient Greek: Φόβος, pronounced [pʰóbos], meaning "fear" or "terror") is the Greek god of horror and the personification of fear in Greek mythology. He is the offspring of both the love goddess Aphrodite and the warrior god Ares. This most feared deity was known for accompanying his father into battle along with the ancient war goddess Enyo, the feared chaos goddess Eris (both sisters of Ares), and Phobos' twin brother Deimos.

In classical Greek mythology, Phobos is more of a personification of the fear brought by war and does not appear as a character in any myths. Timor is his Roman equivalent.

Phobos is the son of Aphrodite and Ares. This may be seen in Hesiod’s Theogony, "Also Kytherea Aphrodite bare to Ares the shield piercer Phobos…" (Atsma). Phobos’s genealogy is shown:

Those who worshipped Phobos often made bloody sacrifices in his name. In Seven Against Thebes by Aeschylus, the seven warriors slaughter a bull over a black shield and then "touching the bull’s gore with their hands they swore an oath by… Phobos who delights in blood…"(Atsma). Ares’s son, Kyknos, "beheaded strangers who came along in order to build a temple to Phobos (fear) from the skulls." (Atsma).

Warriors and heroes who worshipped Phobos, such as Heracles and Agamemnon, carried shields with depictions of Phobos on them.

Hesiod depicts Phobos on the shield of Heracles as "…staring backwards with eyes that glowed with fire. His mouth was full of teeth in a white row, fearful and daunting…" (Atsma) and again later during a war scene as being "…eager to plunge amidst the fighting men," (Atsma).

Phobos often is depicted as having a lion’s or lion-like head. This may be seen in Description of Greece by Pausanias, "On the shield of Agamemnon is Phobos (Fear), who[se] head is a lion’s…" (Atsma).

According to Plutarch, Alexander the Great offered sacrifices to Phobos on the eve of the Battle of Gaugamela (in all probability asking for Darius to be filled with fear). This was believed by Mary Renault to be part of Alexander’s psychological warfare campaign against Darius III. Darius fled from the field of Gaugamela, making Alexander’s praying to Phobos seem successful as a tactic.

American astronomer Asaph Hall named a moon of the planet Mars, "Phobos", which he discovered along with the second Mars satellite, "Deimos", in 1877. Phobos is the larger of the two satellites.

Deimos and Phobos in Sparta

The two brothers Deimos and Phobos were particularly worshiped in the city state of Sparta as they were the sons of Ares, the god of war. Phobos in Greek literally means fear (Ancient Greek: Φόβος).

Phobos and his brother Deimos are the main antagonists in Rick Riordan's short story, Percy Jackson and the Stolen Chariot. Phobos is shown as individual fear, while his brother focuses on crowds. 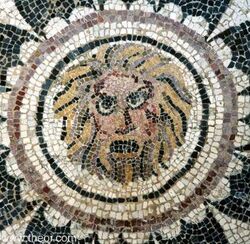 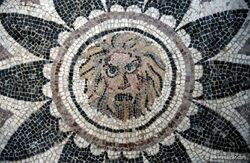