Member of the Monster Association

Destroy the Hero Association and become the next Monster King (failed).

Initially an unnamed human that played the mascot of a comedy shown called "Animal Kingdom", he eventually became a monster himself after staying in his costume for too long.

He started off as a cowardly but kindhearted member of the Monster Association and was open to finding new members. However, upon being resurrected, he disregards those above him and seeks to gain power that will make him at the top of the world.

Phoenix Man's initial appearance was an exact resemblance of the costumed character he used to play as known as Birdbrain. He appeared to be a tall phoenix with a large wingspan and long tail feathers. He also retained his human hands in this form, which would appear out of his stomach. In the webcomic, his human face would appear in front of his chest.

After being resurrected for the first time, Phoenix Man gains a more humanoid form. This time, his bird costume takes on an armored-like form, with his bird head now formed as a helmet, revealing his true face. He also gains two extra pair of wings and an eye in the middle of his chest. In this resurrection stage he gains access to Fire Falcon Mode, which gives him an appearance closer to that of a falcon, and Prominence Hawk Mode, giving him an appearance of a fiery hawk.

Upon being resurrected a second time, Phoenix Man gains access to the Brilliant Eagle Mode, where he resembles a bright, shining eagle, only with a much sharper and defined appearance. He also gains eyes appearing around his chest.

In his final resurrection, his appearance remains the same as it did previously, but with the flesh and feathers torn and burnt away, revealing a more horrifying and gruesome look. With the feathers burnt away, his two-sided appearance gives a contrast of an angelic and devil appearance.

Phoenix Man is somewhat unique to the other monsters in which he has shown sign of friendliness to those that he considers as his allies and appears to be rather sophisticated, preferring to solve situations in a more civil manner, contrasting the dramatic bloodlust of other certain monsters. Nonetheless, like the rest of them, he seeks to create a race of monsters and have them as the ruling race of the world.

Phoenix Man has shown to be rather confident in his abilities and often be quite arrogant when facing against his opponents, underestimating their skills. Upon being resurrected, Phoenix Man's arrogance reaches to a higher degree, to the point where he disregards everything around him and that with his newfound powers, he can see himself becoming the next Monster King, surpassing Orochi. It is also noted that in this state, he becomes more bloodlust and wrathful. This shown during his final battle with Child Emperor where he claims he intended to grant him a merciful death, but after having his costume destroyed, he wants to grant him a gruesome death by plucking out his organs.

Phoenix Man was once an ordinary man that starred in Animal Kingdom as the show's mascot, Birdbrain. The character would often get himself in dangerous situations where he would die constantly, but would always come back as if nothing happened. The show was eventually cancelled, due to the dark humor and as a result, the man that played Birdbrain was fired.

Despite no longer starring in the show, he refused to take off the costume as he accepted the role as a part of him. As time went on, he would slowly descend into insanity when he discovers that he cannot take off the costume as the costume has become one with him and hears voices in his head. The costume then proceeds to transform him into a new being as a whole, granting him the abilities of Birdbrain.

Phoenix Man started as a Demon monster, but despite this, he does not show much impressive powers and skills in his initial form. When he first encountered Child Emperor, he was easily beaten and killed by the boy, despite having confident in himself. However, once he was resurrected for the first time, he became very powerful, to the point where he was reclassified as a Dragon. He gained numerous abilities that made him a very powerful opponent for Child Emperor.

Resurrection: Based on the character's immunity to death, Phoenix Man was granted the ability to resurrect himself. Every time he is killed, he comes back in a much more powerful form than before. The only way for him to truly stay dead is to tear off his costume and destroy his exposed body.

Reanimation: After resurrecting into his second form, Phoenix Man is granted the ability to bring back nearby organisms back from the dead. He demonstrates this ability on the corpses of the Subterranean people nearby, as well as on Gale Wind and Hellfire Flame, whom had recently been killed by Flashy Flash. While the reanimated corpses retain their original skills and abilities, they do not retain their original state of mind and instead follow only the orders carried out by Phoenix Man. Interestingly, however, if the corpses are powered with electricity, it is possible to bring them back fully to their healthy states as shown with Gale Wind and Hellfire Flame.

Phoenix Fire Falcon Mode: In this form, Phoenix Man is given the appearance of a falcon where his speed and agility have been augmented to a higher degree, making him move and fly around at faster paces. He can also land devastating strikes in a short period of time in this form as well.

Phoenix Prominence Hawk Mode: Phoenix Man gains the appearance of a fiery hawk where he is able to absorb energy based attacks and grants him the immunity to flame-based attacks.

Phoenix Brilliant Eagle Mode: The next form that Phoenix Man gains upon being resurrected a second time. In this form, the abilities of his previous forms are carried over here and he can use the energy stored in his body to bring back those from the dead. 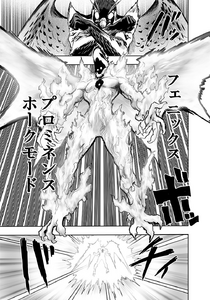 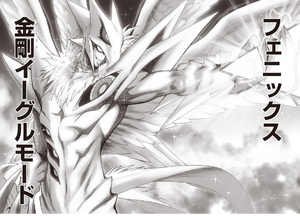 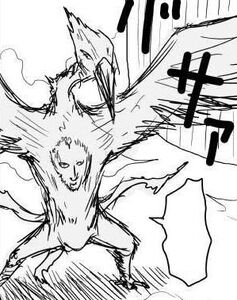 Original webcomic design.
Add a photo to this gallery

Retrieved from "https://villains.fandom.com/wiki/Phoenix_Man?oldid=3891271"
Community content is available under CC-BY-SA unless otherwise noted.