Villains Wiki
Register
Don't have an account?
Sign In
in: Spoilers, Mature, Articles under construction,
and 38 more

Three and a Half (by Cinnabar)
Pospopilizliz (by Variegatus)

Librarian
Partner of the Lunarians

Sitting around and walking casually (formerly)

Bring back Antarcite and other gems.

Turn all gems into dust after returning from Earth.

Made some of the Gems betray Sensei and leave for the moon, leaving their partners behind

Phosphophyllite, simply known as Phos, is the main protagonist in Land of the Lustrous manga and anime series, and the youngest gem at the beginning of the story. They were presented as a weak and jovial person from the beginning, but as the story goes, Phos started to change in both body and mind, and eventually started to do questionable motions after their head was replaced with the head of Lapis Lazuli.

Under Lapis' influence, Phos started to betray Adamant-Sensei, who was revealed to be a machine made for Lunarians to pray and made them into afterlife. They started a rebellion and made several other gems to leave for the Moon, in order to force Adamant-Sensei to go onto his duty, even at the price of departing several working partners.

As a result of their questionable actions, Phos is considered as one of the major antagonists of the Moon Arc (on Adament-Sensei and other Gems' side).

They're voiced by Tomoyo Kurosawa in Japanese version and by Sarah Wiedenheft in English version.

At the start of the series, Phos is one of the weakest Gems in the whole series, with 3.5 of hardness and the weakest flexibility out of all gems, only harder than Antarcticite (3) and Cinnarbar (2). They're also the youngest gem appeared in the first part of series. They started as a jovial, casual and arrogant person who talked big and had a flexible way of thinking. However, Phos was interior fragile, being afraid of getting useless and was often hesitating in a fight with Lunarians. They also cared for Cinnabar greatly as they find Cinnabar's solitude sad.

Nonetheless, after witnessing Antarcticite's abduction at the hands of Lunarians, Phos started to change in their personality and turned calmer, less hesitating in a fight. Traumatized by the events in winter, Phos started to turn more powerful, more modest and more ruthless, and in times more melancholy and solemn, no longer being energetic and bubbly. They also grew more and more distrustful to Sensei after the confrontation with Shiro, discovering that he could communicate with Lunarians. They also seemed to get less affectionate to Cinnabar, as they started to lose memories with them, although they later still consider Cinnabar as a friend.

After being attached with the head of Lapis Lazuli, Phos started to get darkened. They became much more intelligent due to merging with the mind of Lapis. They became more level-headed, cautious, observant, cunning and above all - manipulative, just as Lapis had been. They now focus more on their own goals and the safety of the others Gems over their concern for Adamant-sensei, even to the point of working for Lunarians and causing mass panic and distrust between Gems. They also fully forget their promise to Cinnabar and is more focusing on making other insurgent Gems to get to the moon.

Even since their birth, Phosphophyllite, or Phos for short, was under the education of Adamant-Sensei (Kongo-Sensei) the leader of the Gem People as well as their caretaker, who treated them with great care.

At the beginning, Phos was introduced as a young Gem who wishes to be a fighter but was too weak and brittle, as well as untalented in any other areas. Some other Gems considered Phos as a burden, much to their dismay. It was also revealed that in all of the winters before the main story, Phos went back to sleep at the fastest speed.

After an attack from the Lunarian invaders, Phos was shattered when they tried to fight due to their low hardness. In spite of Phos' determination of fight, other Gems adviced Phos not to do so, and some even mocked Phos for their naiveness and foolishness.

In order to help Phos from their situation, Sensei summoned Phos as he finally found a job suitable for them. He adviced them to create a natural history encyclopedia. Phos had no idea how to go about this and went to ask the other Gems for advice. Eventually, Phos weas pointed towards Cinnabar, a Gem who stayed outside away from other Gems and patroled the beach at night, avoiding the other Gems because of the poison that their body secretes.

In order to make Cinnarbar their partner, Phos searched for Cinnabar all day but did not manage to find them. Resting on a hill, Phos was suddenly attacked by the Lunarians but Cinnabar appears and drives them off with their mercury. In spite of this, Phos lost their research project and Cinnarbar was shattered severely, but Cinnarbar just cynically told Phos that they had the lowest hardness of 2 among every Gems before they collapsed.

Both Gems become damaged during the incidence and Rutile, the doctor of Gems, repaired them both, before Cinnarbar left. Rutile asked if Phos lost any aspect of their memory due to losing some shards, and Phos made a joke that Rutile was a quack. Enraged, Rutile tried to punish Phos before the latter took their words back.

From Rutile, Phos learned that the hill where they and Cinnarbar were attacked was a dangerous place where Heliodor was recently captured. They went back and meet Cinnabar again, learning that the other Gem stayed on that hill because they don't want to bother anyone anymore. They even made wishes to be taken to the Moon.

Troubled by this, Phos makes a one-sided promise to help Cinnabar find an interesting job in order to make Cinnarbar happy. 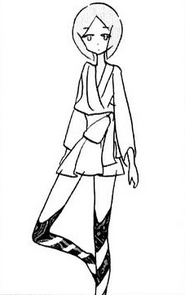 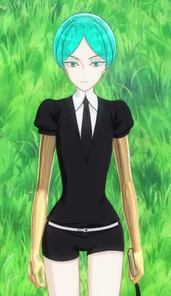 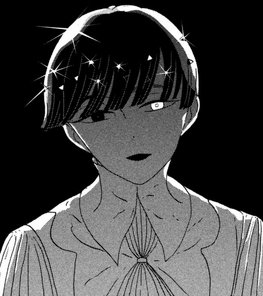 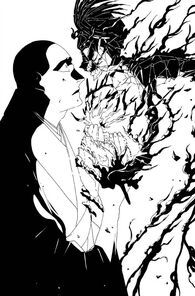 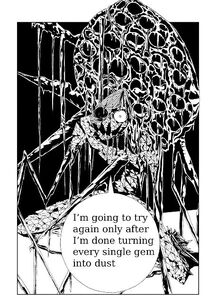 Phos's form contrasting the large flower seen when they first gain their alloy.

Phos's current form, with a leaf like alloy protruding from their neck