Villains Wiki
Register
Don't have an account?
Sign In
Advertisement
in: Articles under construction, Female, Right-Hand,
and 25 more
English

Commander of the Forces of Nature

Phosphora is a minor antagonist in the videogame Kid Icarus: Uprising, making her debut appearance in the 14th stage (and chapter). She is one of Viridi's generals, and her army known as the Forces of Nature.

As Pit is flying towards the war between the Underworld Army, and the Forces of Nature, he encounters Thanatos fighting Phosphora. Despite Thanatos being the God of Death, he was defeated and presumably killed, by Phosphora. After defeating Thanatos, Phosphora goes to the abandoned Thunder Cloud Temple to recharge her powers. Lucky for Pit, Phosphora was wounded after her fight with Thanatos, so Pit could have a chance to defeat her. While Pit was trying to reach her location, she tries to lower Pit's guard by flirting with him and calling him cute a few times. Eventually, Pit managed to enter the room where Phosphora was and confronted her. After her defeat, she disappears in a flash of light, while regretting calling Pit cute.

In Super Smash Bros. Ultimate, Phosphora is a assist trophy again and a support spirit that grants immunity to electric floors. She can be summoned using the cores of Elec Man and Rotom.

Phosphora can be rather rude and disrespectful, an example of this is when she calls Palutena "ma'am", angering the goddess and scaring Pit because he knows Palutena doesn't like being called that. She also sometimes uses her beauty to locate a weakness in her enemy, such as when she continuously flirted with Pit in Chapter 14: Lightning Battle, her specific level. After Pit defeated her in battle, she rudely expressed that she regrets calling him cute before vanishing.

Her behavior is very similar to the way a teenage girl behaves, by using her beauty to seduce people to find out what they're weak to, noticing that Pit embarrasses easily, as Palutena stated in a part of the chapter. Also being rather lazy, expressing her feeling of having to battle opponents that threaten the Forces of Nature for Viridi, her master, especially when Pit continues his mission to defeat her, saying that it wasn't her "day" for having to battle both Thanatos and the angel in one day, but quickly got to work in an attempt to defeat and possibly kill Pit for Viridi.

Viridi tells Pit and Palutena that the "free-spirited" Phosphora "isn't one to put down roots", possibly hinting that she goes wherever she desires without a care as to where she goes, similarly to the way a nomad behaves; going wherever they please.

The reason Viridi recruited her into the Forces of Nature was because of her immensely powerful abilities, such as her ability to generate electricity from her body as aforementioned, her ability to create and manipulate lightning storms at will, but must recharge her powers after a long and costly battle, due to her using much of her lightning powers to fend off her's and Viridi's foes. She also has the ability to fire giant blasts of electricity that are quite lethal. She was also recruited for her ability to overpower and weaken her opponents by the use of her own methods, mostly through seduction. 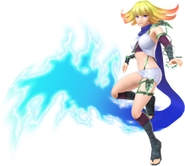 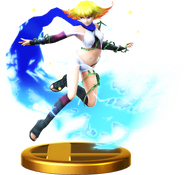