The Photo-Negative Mickey Mouse Costume is the main antagonist of the Creepypasta short story "Abandoned by Disney". It is a grotesque, possessed mascot costume that resides in an abandoned amusement park.

The story follows a man who is exploring abandoned areas in the Bahamas, with one of note being an abandoned Disney theme park. The park was to be called "Mowgli's Palace", and would have been a jungle-themed beachside resort. However, the project was scrapped halfway through construction for unknown reasons, and the unfinished amusement park was left to rot in the jungle.

The protagonist goes out in search of the park, getting only vague responses from locals as to its location. However, he eventually did find it and began exploring. As he explored, he discovered many strange and unsettling things, such as water still running in the bathrooms, meat hooks swinging by themselves in the kitchen freezers, and the what sounded like a distant conversation that ended in crying. The protagonist also discovered several scrawled messages reading "ABANDONED BY DISNEY" throughout the ruins, though he assumed they were graffiti.

The protagonist eventually came across a mascot preparation building. After cutting the locks and entering, he found a character preparation room and entered, where several Disney character costumes were left on shelves and racks. One was a Mickey Mouse costume with an inverted color scheme, almost photo-negative in color, lying on its back in the center of the room. As the protagonist inspected a Donald Duck character head, he was shocked and horrified to discover a human skull inside.

After this revelation, the protagonist tried to run, but heard a sound and stopped to investigate. Upon looking back, he saw the Mickey Mouse costume rise up and stand on its own. It stared him down before asking if it wanted to see its head come off. It then pulled off the character head, slipping chunky yellow liquid all over the floor. It began to chase the protagonist, but the protagonist escaped the room and shut the door. As he fled the abandoned park, he saw one last scrawl reading, "ABANDONED BY GOD".

The costume appears like a standard Mickey Mouse character costume from the 2000s, but with a photo-negative color scheme. Its fur and ears are white, its face is navy, its shorts and tie are blue, and its suit is light grey. When it removes its head, curdled, yellow liquid pours from the mask. 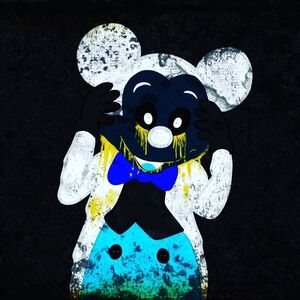 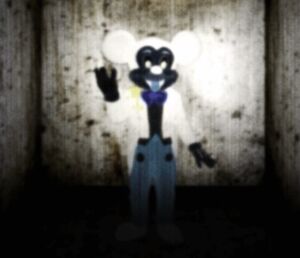 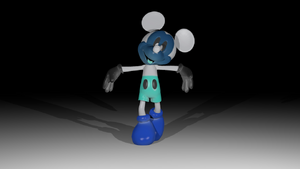 Photo-Negative Mickey as it appears in Five Nights at Treasure Island. 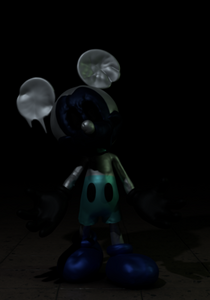 Photo-Negative Mickey as it appears in Treasure Island.

Photo-Negative Mickey Mouse's jumpscare in Treasure Island.
Add a photo to this gallery 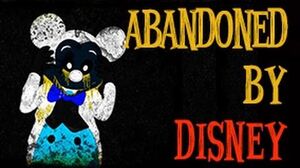 Retrieved from "https://villains.fandom.com/wiki/Photo-Negative_Mickey?oldid=4202667"
Community content is available under CC-BY-SA unless otherwise noted.