Sonic: Night of the Werehog

Taking photos of their victims
Fighting each other

Su and Wu, also better known as the Photographer Ghosts, are a couple of ghosts that are the main antagonists of the short Sonic: Night of the Werehog.

Two boys enter a haunted house during a rain storm. As they explore the house, they are watched by Su and Wu. The two ghosts scare the children out and take pictures of their frightened faces. Once they take their photos, they return to Lah and present her their photos to impress her. Ultimately, Lah chooses Wu's picture and rewards him with a kiss, leaving Su defeated.

This time, Sonic and Chip enter the house. Sonic is interested but Chip is rather frightened. Su scared Chip when he passes by a mirror with a freaky reflection of himself. The photo of Chip impresses Lah, thereafter the ghosts continue to scare Chip to win her heart. Even Sonic accidentally makes a scary face at Chip which causes him to faint. The pile of pictures of a frightened Chip grows with each scare. However, Lah is dismayed to see several photos of Sonic that showed him unaffected by their scares, holding a book, yawning, and making a silly face at the camera.

The male ghosts hunt Sonic and Chip disguised in armor. As Chip cowers in fear, Sonic transforms into his Werehog form upon seeing the full moon and scares the two ghosts, causing their cameras to take photos of themselves. Lah laughs at the photos of the frightened ghosts. Humiliated, annoyed and angered, both ghosts decide to team up to form a giant minotaur-like ghost named Baker to attack Sonic.

While Sonic uses his abilities as a Werehog, Baker gains the upper hand since it can become invisible and invulnerable as such. As the two fight, Chip discovers that Sonic can see Baker by taking its photo. While trying to exploit this fault, the ghost uppercuts Sonic high into the air as he waited for the photo to develop. As he free-fell, Sonic took multiple photos of the ground to expose Baker, only to be attacked again as he tried to make the photos develop faster. After the photos finish, they reveal Baker mockingly posing the same ways Sonic was when Su and Wu took photos of him.

Infuriated, Sonic began recklessly attacking his surroundings, only to take a full charge from Baker and crashes into the wall. As Sonic lay unconscious on the ground, Baker proceeded to take his photo. Su and Wu began to fight over the camera, as they both want to impress Lah, causing Baker to separate. As they fight over the camera, Sonic reawakens and scares them. Sonic then swings them around before tossing them high above and finishing with a powerful punch that sends the ghosts flying to the moon. Right before he punched, the camera went off just before Sonic sent the final blow. Lah found the taken photo of Sonic as the Werehog and falls in love with him.

In the morning, Lah impersonates Chip and has Sonic take a picture with her. However, when the photo comes out, Lah's true form takes Chip's place. After the credits, Su and Wu are seen depressingly looking at Lah and Sonic move farther away. They turn around to see the real Chip, who has been kidnapped so Lah can look like him, struggling to be freed.

Both ghosts are very competitive and fierce, taking their "jobs" seriously to earn Lah's respect. They hardly ever speak (the whole short has no dialogue save from grunts and screams), but each one understands the other's expressions enough to know the other's plans. Although they fight each other constantly, they will join forces if their victims resist too much, or if they are tricked or made fun of. 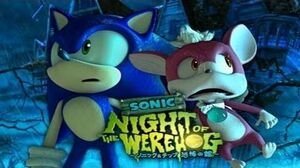 Retrieved from "https://villains.fandom.com/wiki/Photographer_Ghosts?oldid=4045265"
Community content is available under CC-BY-SA unless otherwise noted.