Help King Piccolo in his goals.

Piano is one of the minions of King Piccolo and an antagonist from Dragon Ball, though this is slightly debatable, since he only attends to his "father". A Namekian that resembles a pterodactyl, he served as a major antagonist in the King Piccolo Saga.

He was voiced by Masato Hirano in Japanese and both Sonny Strait and Corby Proctor in English.

Piano was born after King Piccolo was released. Unlike his brothers, he was not a fighter Namekian and simply attended to his father. Piano lived the longest out of all of Piccolo's spawn and lived long enough to see the final battle between his father and Goku commence. He was killed when Goku punched King Piccolo into him and wounded him, then while the fight continued, he was seen sinking into the rubble, apparently dying as he fell underground.

He does not appear in Dragon Ball: Advanced Adventure, but the pterodactyl enemies in the final level may be a reference to him.

Piano is very loyal to his family and father, and never had doubts about King Piccolo's abilities, considering the latter to be far greater than anything else. An example of this is when Shu, Mai and Emperor Pilaf thought Goku had defeated elderly King Piccolo, while Piano states that his father was much stronger than they thought. He also is shown to be sadistic, destroying a hard to make meal prepared for Piccolo because he didn't like it, and told them to make twice as much in less time or they would be killed, and later on complained about their "inadequacy". 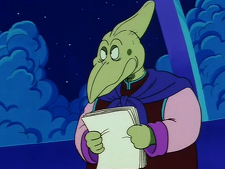