Play his flute to the rats.

Despite being unable to speak, he was voiced by the late Jeremy Steig.

When all of the fairytale fugitives are forced to move to Shrek's swamp by Lord Farquaad, the Pied Piper can be seen playing his pipe to the rats. In this film, he is shown wearing red clothes and looks much different than in Shrek Forever After.

In the alternate world in which Rumpelstiltskin reigns Far, Far Away, the Pied Piper works as a bounty hunter. Thus, after being recommended by one of his witches (whom he kills) to hire some bounty hunter, Rumpelstiltskin hires the Pied Piper to capture both Shrek and all of the other Ogres of Fiona's Ogre Resistance. When some witches mock about the Piper, who has arrived standing on his rats, he makes them dance until they regret their mockery. Rumpel then orders them to give him his money to pay the Pied Piper, who changes his flute's mode from witches to ogres.

Later on, the Ogre Resistance attacks a witch convoy thinking that Rumpelstiltskin was present on his carriage. When they discover that it was a trap, the Pied Piper, disguised as Fifi, reveals himself and subdues the ogres to his melodies. As such, Fiona and Shrek are subdued too to dance until he stops, with Fiona recognizing him. However, Puss and Donkey arrive with a wooden carriage and save Shrek and Fiona by driving them away from the Piper while he guides the subdued ogres to Rumpel's dungeons, seemingly unrealizing that Shrek is not among them. Back at Rumpel's castle, the Pied Piper gets reprimanded by Rumpel for not capturing Shrek, thus leading Rumpel to fire the Piper and proceed to offer all the kingdom the "Deal of a Lifetime", but not before ordering the Piper to accomodate his socks. It is completely unknown what happened to the Pied Piper afterwards, but it is likely that he was wiped out as well when Rumpel's world was erased from existence due Fiona's true love kiss on Shrek, restoring the real world and thus the Piper.

At the end of the film, back on the real world, the Pied Piper is now seen wearing white clothes and making Rumpelstiltskin dance against his will, possibly as revenge for not paying him in his alternate world, if the Piper somehow retains memories of that reality like Shrek or was just made aware of it by Shrek himself.

The Pied Piper made several appearances as a boss is several Shrek video games.

Although he does not appear in Shrek's first two sequels Shrek 2 and Shrek the Third, the Pied Piper is one of the bosses in the video game based on Shrek 2. King Harold asked Shrek, Fiona, Donkey, and Little Red to defeat The Pied Piper. In order to do that, they have to defeat all of his rats. Once all of the rats are deceased, the Piper comes down to fight in a boss battle; however, he is so weak that his entire health bar is depleted with just one hit.

Shrek Forever After: The Video Game

The Pied Piper also made an appearance as a boss in Shrek Forever After: The Video Game. He uses his magical flute to cause a certain amount of obstacles for Shrek. 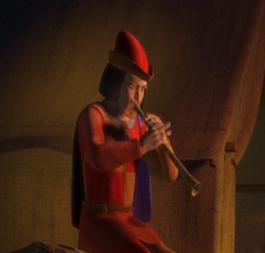 The Pied Piper in Shrek. 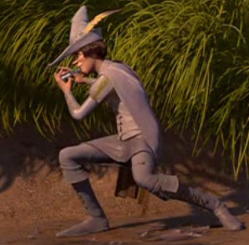 The Pied Piper in the credits. 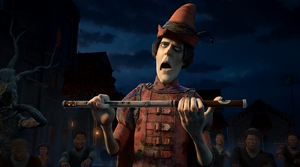 Pied Piper as a zombie.
Add a photo to this gallery 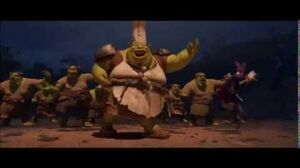 Retrieved from "https://villains.fandom.com/wiki/Pied_Piper_(Shrek)?oldid=3409563"
Community content is available under CC-BY-SA unless otherwise noted.