The Piper
The Pied Piper of Hamelin

The Pied Piper of Hamelin

According to legend, the Pied Piper was a rat-catcher who was called upon by the citizens of Hameline to clear away a plague of rats, which he did with the aid of a magic flute, which hypnotized the rats and he promptly led them out of the town and into a river, where they drowned.

However, when the citizens refused to pay the Pied Piper, he angrily left but vowed to return. On Saint John and Paul's Day, when most of Hamelin's adults were in church, the Piper returned and used his magic flute to hypnotize all of the town's children and took them away just as he had done the rats, depending on the version what occurs next varies in intensity and cruelty. Traditionally, the Pied Piper is said to have led the children into a cave to never be seen again, but later editions had such grisly tales as him leading all the children into the river to drown like the rats or taking them to a distant land, in some less morbid versions the Pied Piper sets the children free after ordering a large ransom from the town but this goes against the original story, which clearly stated the children never returned (with only three children having been spared, due to one being lame and unable to keep up, one being deaf and followed the other children out of curiosity, and one being blind and was unable to see where they were going).

The Pied Piper was likely inspired by a plague that killed many of Hamelin's children, with him representing Death itself - although he may also of represented a historical figure connected to the "Children's Crusade" (though the authenticity of such tales is hotly debated) - others have linked him with a serial killer or some other malignant force that over time became embodied as the now familiar Pied Piper figure.

The Pied Piper also has some similarities with the Devil as he offers aid but becomes vindictive and dangerous when crossed and appears as a stranger with unexplained magical powers. 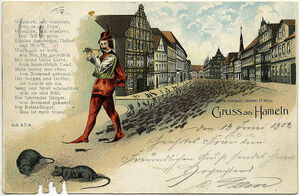 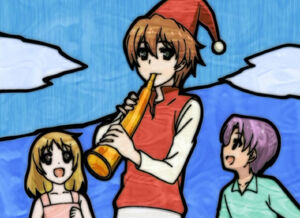 The Pied Piper of Hamelin in Problem Children Are Coming from Another World, Aren't They?. 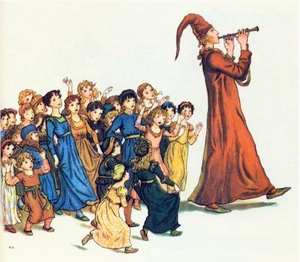 The Piper leading the children away.