Destabilize the world and set it back to its natural state (partially succeeded).

Pierre Danois is the secondary antagonist of the 2014 video game Call of Duty: Advanced Warfare. He is the second-in-command of the KVA and of Hades, before becoming the right-hand man of Jonathan Irons.

He was voiced by Erik Passoja, who also played Sam Russell in Criminal Minds.

Information about his early life is unknown but at one point in time, except he was born in France around 2009, Pierre had gotten into contact with Hades and eventually joined the KVA. He then became the organization's second in command.

During the events of the game, Pierre is first introduced in the mission Aftermath where he and a small squadron of KVA Troops settle into the ruins of Downtown Detroit as any form of military resistance and authority is stationed outside of the city. He and his men settle in but he's eventually caught by soldiers of the Atlas Corporation and after a lengthy firefight, he's captured and taken into custody.

In the next level, he's seen in the opening cutscene where he is being interrogated by Ilona on where his boss is located and eventually reveals Hades' location somewhere in Greece. His last appearance is where he is with Jonathan Irons at his private resort in Thailand and is helping him by giving him the needed materials for the Manticore weapon. After that, he's never seen again for the rest of the game.

He appears to be in his late 40s early 50s as he has greying black hair. He wears a black shirt and had a doctor-like suit when he was operating in Detroit.

His personality is left unknown but apparently he appears to be calm and easy to crack if done right. 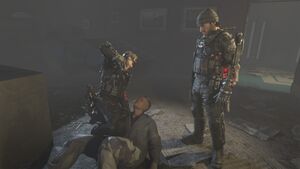 Danois being captured by Gideon and Joker. 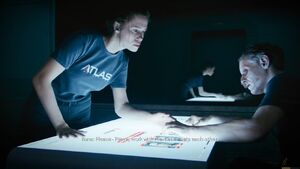 Danois being interrogated by Illona. 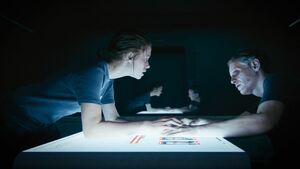 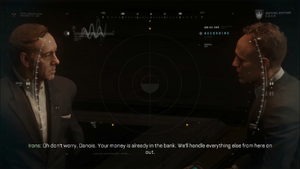 Dr. Danois with Irons in "Sentinel".