Pierrot (Emperor Nogo in the english dub, Glitter Force) is the emperor of Bad End Kingdom and the main antagonist of the anime, Smile Pretty Cure!. For the first half of the season, the Bad End Kingdom villains worked to collect enough Bad Energy to revive him, as he had been sealed away by Royale Queen before the start of the story. In Episode 23, he was successfully revived, but temporarily defeated by the Princess Cures. However, a piece of Pierrot (possibly his heart) managed to escape.

Pierrot resembles a gigantic clown, dressed in a dark purple clown's suit. He has red glowing eyes, a red nose and purple hair, decorated with 4 colored balls that resemble the Akanbe noses. He also has purple flame erupting from the top of his head.

Sometime before the start of the series he was sealed away at the same time the Royale Queen fell into a deep slumber. His minions have been collecting bad energy to try to revive him and seem to have succeeded only to have him suffer a temporary defeat at the hands of the Pretty Cures who attained their Princess forms. A piece of him seems to have been shot off into space where he is undergoing a transformation and a second revival.

As the head of the villains, Pierrot is probably strong, and a blast of Bad Energy from his mouth easily defeated the Cures' Rainbow Healing attack. However, his just-awakened state was no match for the Cure's upgraded Princess Forms and he was temporarily defeated by new attack Rainbow Burst. 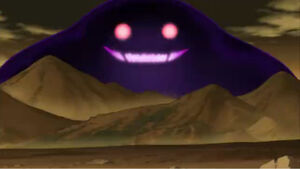 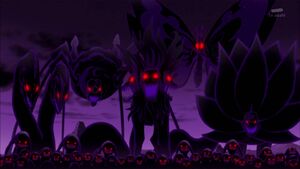 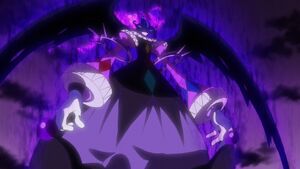 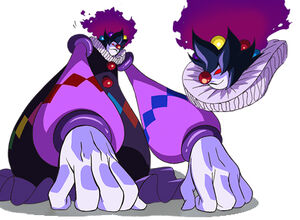 A close-up view at the face of Pierrot.
Add a photo to this gallery

Retrieved from "https://villains.fandom.com/wiki/Pierrot?oldid=3371957"
Community content is available under CC-BY-SA unless otherwise noted.