As the Pig Sheriff and his bounty hunters approached the ancient samurai together with the trash-talking Scotsman, both were in an argument over who they were after and failed to keep themselves from being shackled together after the sheriff shoot a metallic shackle that immediately grabbed both of their wrists. After attempting to escape over two different sides of the bridge, Jack slashed at the planks beneath their feet, causing them to plummet into the marsh below and the bounty hunters' vehicles to be destroyed in a head-on collision.

Once reaching land, and narrowly escaping from the bounty hunters once again, the two warriors reach an abandoned settlement, where, to his dismay, the Scotsman found a wanted poster of Jack posted on the wall. However, this was short-lived as the bounty hunters quickly approached, when fruitlessly attempting to hide the pair attempted to attack their predators, although they had settled their differences, Jack and the Scotsman could not fight to their full extent and after dispatching a philosophical notion in regards to how a bow and arrow work in conjunction yet not separately. Once seeing an opportunity, the two escaped their shackles by jumping in between the giant bullet fired at them, shattering their chains. Finally released, the formidable pair showcased their abilities by destroying their assailants easily, though the Pig Sheriff in his hubristic boasting had them closed with a hi-tech cannon aiming at the 2 combatants, he then pressed the button and yet the cannon backfired. With the battle over and the bounty hunters defeated, Jack and the Scotsman had a newfound respect for one another unfortunately however due to it each man insisting on buying the other a drink, this sparked the beginning of their rivalry and friendship.

It is unknown how the past Aku's destruction affected the existence of the Pig Sheriff and his fellow bounty hunters. 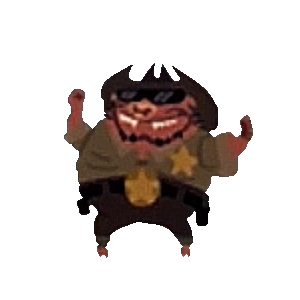 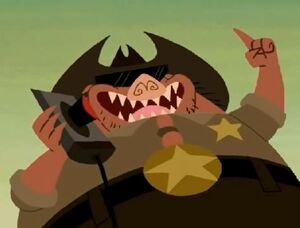