Rat out Junior and Tulip.

Pigeon Toady is the secondary antagonist of Warner Bros.'s second full-length animated feature film Storks. He was Hunter's minion and was an employee at Cornerstore.

He was voiced by Stephen Kramer Glickman.

Pigeon Toady is a dimwitted and ambitious pigeon who would do anything to receive a great promotion. When he suspects that Junior and Tulip have created a new baby, he pursues them hoping to rat them out and be promoted as the boss. He also shows loyalty to his boss, Hunter.

Toady is first seen congratulating Junior, Cornerstore's top delivery stork, for delivering his one-millionth package. He is also shows Junior an image of a Canadian goose on his iPhone claiming it is his girlfriend who has migrated.

Later, as an inventive Tulip tests out the jet packs she created for flightless birds, Toady taunts her for trying another invention of hers which is likely to fail. When Tulip's jet pack gets out of control and sets the factory on fire, Toady grabs a can of fire extinguisher and tries to put out the fire.

After Junior and Tulip accidentally turn on the baby manufacturing machine and produce a new baby, they take the elevator to a lower floor where Tulip's workshop is in place. When the elevator stops at a floor on a high level, Toady steps in and mentions a game that happened the previous night. Junior and Tulip join in on the conversation to distract him. Just when the protagonists exit the elevator, Toady suddenly dawns to the fact that there was no such game as the one he referred to. Then he starts getting suspicious of Junior and Tulip.

Upon his suspicion of the protagonists, Toady finds Tulip workshop and detects baby powder. He begins to believe that Junior and Tulip have created a new baby and becomes determined to tract them down in order to get the evidence he needs as proof for Hunter, who he hopes will promote him as the new boss instead of Junior. Toady builds his own drone and sets off to find the protagonists. He lands in a tundra where he finds more evidence that a baby passed by and questions some of the inhabitants about whether they have seen Junior and Tulip there. Hours later, Toady finally finds Junior and Tulip with the baby they produced while they are sleeping aside a river.

Thrilled that his suspicion was true and that it will likely earn him his promotion, Toady daydreams of himself being the boss of Cornerstore along with his own fancy car and mansion. Then he returns to Cornerstore to inform Hunter of Junior and Tulip's secret mission. Disgruntled that Junior has produced a baby and determined to prevent him from delivering the baby so to protect his package delivery business, Hunter orders Toady to change the address on homing beacon for the baby Junior has. Toady redirects Junior to an where he, Hunter, and Hunter's other cronies set up a fake house as a trap.

When Junior arrives at the false location, Hunter fires him and orders a flock of penguins to abduct the baby. Toady ties Junior to a chair and gags him by tying a rope around his beak and stuffing it with a binky. Then he taunts Junior by placing a baby's bonnet on his head and chiding him, "Who's the baby now."

At the climax, Junior and Tulip reactivate the baby-manufacturing machine producing a great mass of babies. As Hunter orders the machine to be shut down, Toady flies his drone into the machine in attempt to destroy it. When Toady hits the machine, it flings him back toward an electric box where he gets electrocuted. The electrocution seems to have altered Toady's mind for he reforms and agrees with Junior's demand to return the true mission of the stork—delivering babies. Then Toady, along with Junior (now the new boss), and Junior's other employees helps Tulip reunite with her intended family. 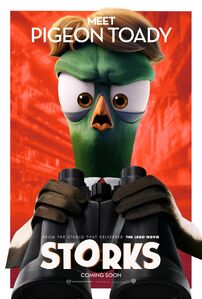 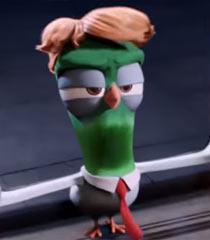 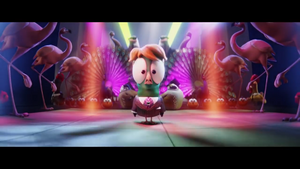 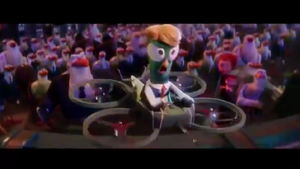 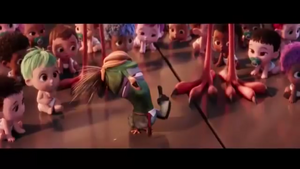