The Pigmasks are major antagonists in the video game Mother 3. They are footsoldiers that serve as the bulk of the Pigmask Army forces, enforcing the organization's rule over the Nowhere Islands.

The Pigmasks are first seen in Chapter 1, setting the nearby forest on fire with bombs and reconstructing the wildlife with advanced technology to make them "tougher, rougher, and badder" (as stated in one of their notebooks). They managed to reconstruct a peaceful Drago and turned it into a hostile reptilian cyborg called Mecha Drago, which eventually caused the death of Hinawa and the disappearance of Claus. the Pigmasks reappear in Chapters 2 and 3, during which they raid Osohe Castle under the orders of Fassad to get the Egg of Light. Although their attempts were foiled by West, Kumatora and Duster, the Pigmasks soon caught up with them armed with tanks. Luckily, Lucas chased them away with the help of a friendly Drago.

In Chapter 4, the Pigmasks have become much more of a common sight since their army had spread its influence across Nowhere Island. Lucas ends up working alongside them in a factory so he can earn enough currency to buy a ticket and watch the DCMC perform at Club Titiboo. When the heroes arrive at Thunder Tower in Chapter 5, the Pigmasks mistake Lucas for their commander and let him and his party enter the otherwise restricted area. However, by the time they reach the top of the tower, Fassad and the Pigmasks have caught onto their ruse and trap them there. Fassad then contacts his men to be taken from the tower's rooftop but accidentally slips on a banana peel he had previously tossed aside and falls off the building. The Pigmasks fly their aircraft down to find Fassad gone and the heroes use this opportunity to briefly catch a ride on the vehicle.

During Chapter 7, Lucas and company find a big facility guarded by a Pigmask that Lucas previously met in Chapter 4. The Pigmask lets the heroes inside the building after they acquire Pigmask uniforms and discover a laboratory where chimeras are created. Later, Navy SQUEALs are found patrolling the waters around Nowhere Island in an effort to stop the party from reaching one of the seven needles keeping the Dark Dragon asleep underground before making their final appearance in Chapter 8, during which they serve as enemies while climbing to the Empire Porky Building's 100th floor where the Pig King resides. 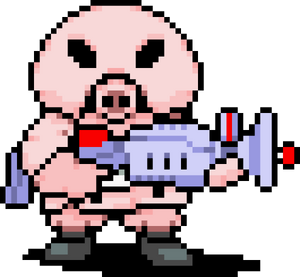 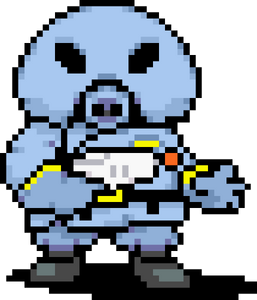 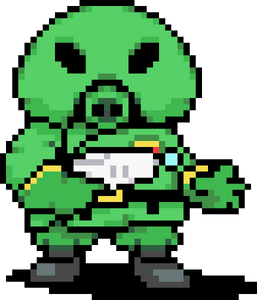 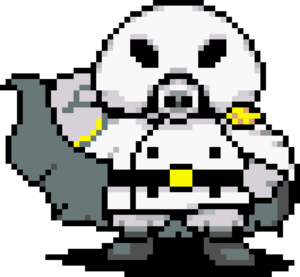 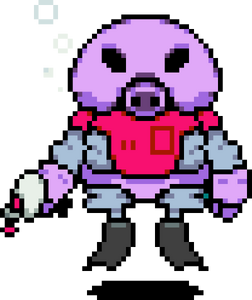 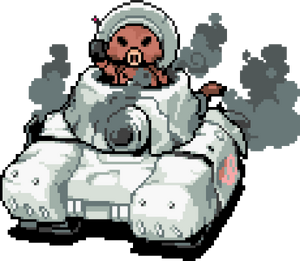 A Pigmask inside a damaged Pork Tank. 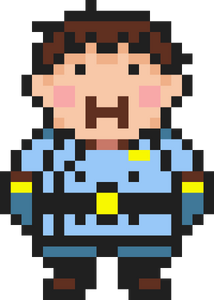 A Pigmask captain without his helmet.