Pilfer is a Corvicon and the brother of Jacknab and Boostwing in Transformers: Robots in Disguise.

Pilfer arrived in Crown City with his brothers and hatched a plan to steal all the gold from the Crown City Gold Depository. He and Jacknab threw off the Bee Team's trial by making it appear Boostwing traveled at impossible speeds. Pilfer remained Jacknab to break in to the Gold Depository.

After Boostwing got taken into custody, Strongarm pondered over the fact that he could be in multiple places at the same time and realized that he'd had to have partners and that the Crown City Gold Depository would be where they would find "the brightest shinies on the planet". She showed up to arrest Jacknab, but Pilfer ambushed her from behind and the brothers overwhelmed and subdued her. He suggested taking her optics as trophies to give to Boostwing as soon as they bust him out of stasis, but the rest of the Bee Team arrived to foil his plans.

Strongarm knocked both of them out with a net of heavy gold. Defeated shortly thereafter, Jacknab found himself cuffed to Pilfer and advised they had the right to run in silent mode. Pilfer's stasis pod was later brought back to Cybertron aboard Prime Force One by Optimus Prime and Drift. 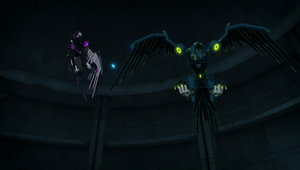 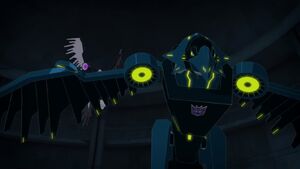 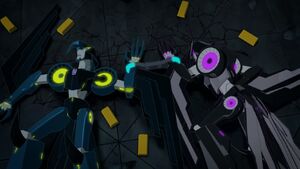 Pilfer and Jacknab's defeat.
Add a photo to this gallery

Retrieved from "https://villains.fandom.com/wiki/Pilfer?oldid=3540129"
Community content is available under CC-BY-SA unless otherwise noted.