Villains Wiki
Register
Don't have an account?
Sign In
Advertisement
in: Mature, Evil from the Past, Vampires,
and 18 more
English

Live life as they please.

Man-eating
Attempted slavery (using humans as slaves)
Attempted global hegemony (both by Kars and his crew; both failed)

The Pillar Men are the primary antagonistic force in JoJo's Bizarre Adventure: Battle Tendency. They are a group of evolved ancient humanoids. Formerally found across the Americas, they are very smart, impressively strong, live far longer than humans, and have the ability to manipulate their bodies. They are weak to sunlight and the Ripple, reproduce little (they felt no need to produce many, as they were the most highly evolved beings and being the most powerful beings at that time), and sleep for millennia at a time, however. The Pillar Men also have horns, displaying them proudly. There are only four left alive at the time of JoJo's Bizarre Adventure: Battle Tendency.

An intelligent, strong, and long-living race, the Pillar Men once ruled Earth as its best beings, with humans worshiping or fearing them. Although most were content with their abilities and lives, Kars, considered as a prodigy of Pillar People, was not. Seeking perfection, he created a Stone Mask in an attempt to unlock Pillar People's full physical potential. But the Stone Masks worked best with low-level organisms such as humans. Kars suffered enormous hunger as Stone Mask's side effect, and began to feed insatiably. Eventually his race feared Kars and tried to kill him from wreaking havoc on all life. At first Kars attempted to reason with his people, citing that do they not want to be perfect (such as being able to conquer sunlight, the only weakness for Pillar People). Realizing it is pointless, Kars not only stayed alive, but managed to kill every other member of his race besides Esidisi, Wamuu, and Santana.

Some time later, Kars discovered that in order for Kars to become the 'perfect being' he seeks, he needs an artifact called 'Super Aja', a flawless artifact of power combined with a modified Stone Mask would grant Kars the immortality and perfection. Seeking Super Aja, Kars along with Wamuu, Santana and Esidisi, went on a long journey in search of the said artifact, battling Hamon Warriors along the way. But the last fight against Hamon Warriors in Rome in which Hamon Warriors were very nearly eradicated, Kars and his Pillar Men spent considerable energy and strength, forcing them into 5000 year dormancy to recuperate.

The last survivng four Pillar Men reawoke 5000 years before the events of JoJo's Bizarre Adventure: Battle Tendency, capturing and experimenting on humans with the Stone Mask. Finding that the Super Aja - a rarest artifact among Red Stones of Aja had the key to become ultimate beings, the main three headed off to Rome, leaving Santana behind in Mexico. They were unable to find their precious stone, and slept within a cave until 1939.

In 1939, the Speedwagon Foundation found the temple Santana was in. Intending Straizo to destroy him, he was later betrayed by the newly made vampire, with Rudol von Stroheim finding and studying Santana. Reawakened, Santana killed everyone inside the building they wre in but Stroheim and Speedwagon before through the help of the former and Joseph Joestar, Santana was sealed away.

Some days later, Wamuu was reawakened and soon also revived his partners. Speedwagon, Joseph, and Caesar Zeppeli soon came on to the scene, which they lost but lived. Forcing Joseph to seek them through poisoned rings, they sent off through Europe to find them.

A month later, Esidisi learned that the location of the Aja Stone was on Air Supplena Island along with Lisa Lisa. Although Esidisi's body was wrecked, he possessed Suzi Q to mail the stone to San Moritz. Esidisi was then extracted and ended. Kars sent out for the Swiss border to find his price, only for the Nazis to interrupt the message. Kars bet a improved version of Stroheim, who let him keep the stone for sparing him.

Caesar then went to the Pillar Men's hideout, only to be fought by Wammuu. In the fight, Caesar dies. Wamuu then fleed to Kars' location with a vampire army. Tracking him through his blood, Joseph eventually has a chariot race against Wamuu, where Joseph wins. Despite the honored contract, Kars attacks Lisa Lisa, obtained the Stone, and unleashed his blood-sucking horde. However, the Nazis and the Speedwagon foundation manage to defeat Kars. Cornered, Kars activates the mask to become the ultimate being.

Kars tries to furiously kill Joseph, as he flees to a volcano. Joseph tries to plunge Kars within the lava, only to fail and have his left arm cleaved through. As Kars tries to kill his enemy, Joseph uses the Stone of Aja to trigger the volcano's eruption. Kars is then blasted into the sky and into space. As Kars drifts off into the void, he loses the ability to think or move with time, immortal but destined to float in space forever. 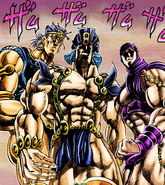