Professor Teddyus Jay Pinchworm is the main antagonist of the "Birthday World" episode of The Wacky Adventures of Ronald McDonald. He is a professor and the owner of the episode's titular corrupt amusement park, whose goal is to use the Baby Ree to turn people and everyone else it zaps into babies so he could rule the world.

He was voiced by Phil Snyder.

After overhearing Hamburglar's lamentations about having nothing to give to Ronald McDonald for his birthday, Teddyus Jay Pinchworm uses him as a way to take over the world and talks him into giving him free tickets to Birthday World. Later, Hamburglar takes Ronald and the rest of the gang to the park and gives Pinchworm the tickets, only to then find out the doors are locked. They try out certain rides, which do not turn out any good. Pinchworm then talks the gang into going on a roller coaster called "The Ride of Your Life", much to the gang's dismay. In the end, a ray gun called "The Baby Ree" zaps the gang, rejuvenating them into babies and toddlers. However, the gang escapes when Baby Ronald, using a pogo stick, unlocks it.

Pinchworm, finding out the gang has escaped, summons his robot dog, Cogster, to find Baby Ronald McDonald, describing him. However, after being tricked into fetching a bone (made from a piece of metal junk) by Baby Ronald himself, despite finding him, he brings it to Pinchworm, much to his anger. Because of this, Pinchworm traps the baby gang and threatens them with no dessert after dinner if they do not stay in one place. Baby Ronald, using pepper Baby Grimace lends him, causes a cloud to rain a hedge maze, thinking it should slow him down. He does, however, find them by breaking through one of the hedges and interrogatively threatens them with skipping a bedtime story. For this, Baby Ronald whistles a hedge sculpture awake and gets him to use Pinchworm for a toy.

Next, Baby Hamburglar points out a barn with a sign (looking like Pinchworm) telling them "Ronald and Friends Hide Here", only for it to turn out to be a trap, where Pinchworm reveals his plan: to turn the entire population of people into babies with his Baby Ree, so he would rule the world. Soon after, before it is time to throw the big switch and turn the Ferris Wheel into the Baby Ree, all the babies except Baby Hamburglar are trapped in nets, so he uses one of Ronald's birthday gifts (which looks like a small model in which his head pops out with a spring) and pushes the button too hard and his head pops off and it lands into the Ree, and Baby Hamburglar saves himself and his friends, with Pinchworm's Baby Ree exploding and turning them back from babies to normal, and Pinchworm into a baby. Finally, Baby Pinchworm meets the final part of his defeat when Cogster chases after him as "food". 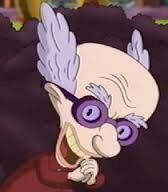 Add a photo to this gallery
Retrieved from "https://villains.fandom.com/wiki/Pinchworm?oldid=4211560"
Community content is available under CC-BY-SA unless otherwise noted.