Evil Minion
Pineoctopus is an antagonist from the TV series Mighty Morphin' Power Rangers who appeared in the episode "No Clowning Around".

He was voiced by Tom Wyner.

Rita's newest plan was to set up a trap for the Power Rangers using a carnival in Angel Grove. Several Putties, disguised as clowns, were at the carnival and they kept an eye on the teens. Finster created Pineoctopus and trained him as well. Pineoctopus went to the carnival, disguised as Pineapple the Clown. Zack had been goofing around on stiles as Kimberly, Billy, and Jason watched, along with a "clown". Zack had started dancing and fell to the ground. The four teens decided to check out the rest of the carnival and walked away.

Trini reminded Sylvia that they needed to stick together. Trini suggested they go see some gymnastics and then come back and see Pineapple. Sylvia gave Pineapple a sad wave and Pineapple returned the wave, telling her see you later. Moments later, Sylvia was watching Trini, Billy, Jason, Zack, Kimberly, and a clown forming a human pyramid. Pineapple walked up to her and stood by Sylvia. Pineapple kept nodding his head that they should leave. Sylvia left holding Pineapple the Clown's hand. They walk through the fair grounds. Eventually Pineapple the Clown stopped and began performing a magic trick for Sylvia. Trini had caught up to them and told Sylvia that they had promised to stick together. Pineapple the Clown tried to grab Sylvia and told Trini that Sylvia was staying with him. Trini stood protectively in front of Sylvia and told Pineapple to back off. Sylvia quickly stood in front of Pineapple the Clown and asked Trini not to hurt him. Pineapple sprinkled some dust on Sylvia, which turned her into a cardboard cutout. Pineapple acted like he was surprised and covered his mouth mockingly. Pineapple the Clown then took off. Trini realized that carnival was a trap and found her friends to let them know. Trini took Sylvia to Billy's lab. Jason grabbed a megaphone and warned the people that the carnival was a trap. The grounds emptied quickly. Soon it was just Billy, Jason, Zack, and Kimberly. Several clowns began walking towards them. The clowns soon revealed themselves to be Putties. Pineapple the Clown lured Billy away. Pineapple told Billy if he wanted to save Sylvia he needed to follow him. Jason, Zack, and Kimberly battled the Putties as Billy followed Pineapple. Billy soon lost track of Pineapple. Pineapple pop out from behind Billy. Billy spotted him in a mirror and ducked out of the way as Pineapple sprinkle dust.

Pineapple vanished. A Putty was turned into cardboard instead of Billy. Eventually all the Putties are defeated by the four teens. Pineapple the Clown pops up in front of Jason, Zack, Kimberly, and Billy, making Kimberly scream. Pineapple told them no more clowning around and melted into the ground, revealing his monster form - Pineoctopus. Zack, Kimberly, Billy, and Jason morphed. Several more Putties arrived, along with Goldar, Squatt and Baboo. Black Ranger, Pink Ranger, Blue Ranger, and Red Ranger battled the Putties. During the battle, Pineoctopus and Goldar slipped away to the park. After defeating the Putties, the four Rangers teleported to the park. Goldar battled them. Goldar had knocked them to the ground, when Pineoctopus arrived with Baboo and Squatt. Pineoctopus not to finish off the Rangers. Pineoctopus wanted to turn them into cardboard. Pineoctopus sprinkled dust on the four Rangers. The Rangers' suit protected them from the dust. The dust caused Baboo, Squatt, and Goldar to sneeze and they eventually vanished.

The Rangers had been battling a giant Mutitis with Dragonzord and Megazord. During the battle, Mutitis spray toxic foam on Megazord and Dragonzord. The Rangers were ejected and land on an island demorph. They quickly discovered they didn't have their communicators or power coins. Jason suggested they explore the island and they did. They ran into Quagmire but he vanished as soon as he heard the name Rita. Suddenly an image of Goldar's face appears in the sky. He asks them if they lost their precious power coins? You'll soon lose more than that! Pineoctopus, Pudgy Pig, Eye Guy, Snizzard, and Shellshock appear. Kimberly points the monsters out. Zack is not happy. Oh great! No coin, a tone deaf little person, and an island full of monsters. Trini points out they are monsters they have already destroyed. Pineoctopus, Pudgy Pig, Eye Guy, Snizzard, and Shellshock race towards the teens. Jason shouts that they are attacking. The teens get into fight positions. Pineoctopus, Eye Guy, Snizzard, Shellshock, and Pudgy Pig are almost at them when they suddenly vanish. Billy comments that was weird - they disappeared. Tommy asks what kind of place is this, but Goldar replies a place where nothing is what it seems except the danger. Welcome to the Island of Illusion. 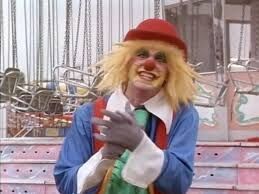 Pineoctopus as Pineapple The Clown.