Pinocchio is the titular main antagonist of the 1996 horror film Pinocchio's Revenge. He resembles an evil version of the fairytale character of the same name, Pinocchio, who has a darker side and murders, anyone after his strings got cut off. He is likely a parody of Child's Play and its titular villain Chucky.

He was voiced by the late Dick Beals.

Defense attorney Jennifer Garrick believes her client Vincent Gotto, an accused child murderer on death row, is not guilty and is hiding the identity of the real killer. After he is executed, she accidentally brings a Pinocchio doll buried with her client's son home with her from the office, and her daughter Zoe mistakes it for a birthday gift. She starts acting strangely as she develops a relationship with the puppet.

Soon, she even believes the doll to be real and talks with it, although this is not out of the ordinary, as she held a similar relationship with her other dolls. Trouble takes off when a school mate of Zoe who bullied her is pushed in front of a bus, which Zoe blames on Pinocchio trying to protect her. Soon after, Jennifer's boyfriend, David, is knocked down the basement stairs while babysitting Zoe but is saved by Zoe calling 911. Later, Zoe is at one of her therapy sessions when her psychiatrist has to leave the room and Zoe begins talking with Pinocchio about who is to blame for David's accident, with both placing blame on one another.

A surveillance video in the room is watched by the mother and the psychiatrist and it is revealed that Zoe is talking to herself. That night, Pinocchio convinces Zoe to set him free so that he can admit to David that he is to blame for his accident. Zoe makes him promise he will not do anything bad and cuts his strings, at which point Pinocchio hops up, declaring his freedom and takes off down the dark streets with Zoe in pursuit. From a first-person perspective, we see an unknown person move through the hospital through crowds of people into David's room and unplug one of his machines, killing him.

Jennifer questions Zoe, who claims she got lost as she and Pinocchio try to find the hospital and never went there, which causes an angry and confused Jennifer to lock Pinocchio in the trunk of her car. That night, Zoe is left in the care of the babysitter, Sophie, when Sophie reminds her that Zoe gave Pinocchio a conscience (a cricket caught earlier in the film). Zoe runs to her room to check on it and finds it smashed and begins screaming. She runs to make sure she is okay, where she is struck by a fireplace poker from an unknown assailant until she is dead. Jennifer arrives home that night during a thunderstorm to find the babysitter dead and Zoe standing in a dark hallway quietly. When Jennifer tries to confront Zoe, she runs away in a panic. As Jennifer explores the house, she is struck by the poker and sees her daughter standing above her with it in her hand.

Her daughter explains that she just managed to get the poker away from Pinocchio but they must escape quickly, but before Jennifer can inquire further, Zoe is gone. Jennifer stands up to see Pinocchio standing in the room, at which point he suddenly turns towards her and attacks her with a knife, following with a chase and battle through the house. Jennifer throws Pinocchio through a glass coffee table and sees that her daughter is suddenly laying there in his place. The movie closes with a catatonic Zoe being committed and Jennifer stating it was not her and that she will not give up until she gets better and can leave, to which the psychiatrist states, "I hope not, for your sake, I hope not.". 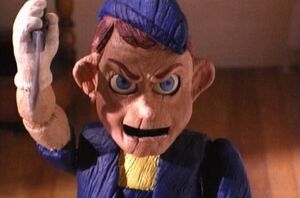 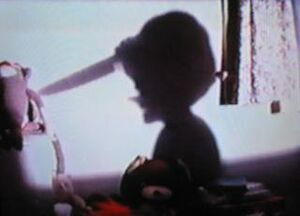 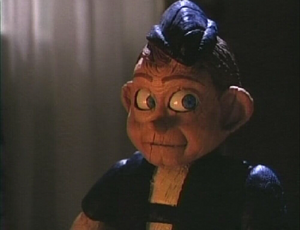 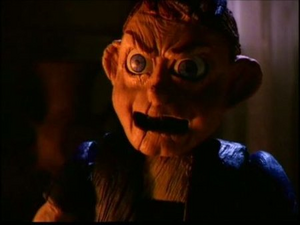 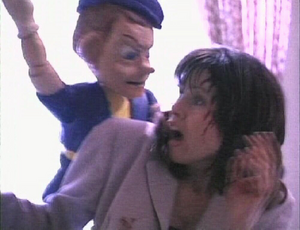 Pinocchio jumping on to Jennifer 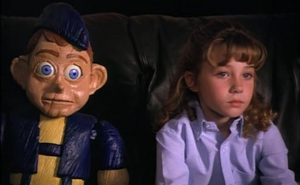 Pinocchio at the doctors with Zoe, notice that Pinocchio has more of a shocked look on his face.
Add a photo to this gallery

Retrieved from "https://villains.fandom.com/wiki/Pinocchio_(Pinocchio%27s_Revenge)?oldid=3834456"
Community content is available under CC-BY-SA unless otherwise noted.