Take revenge on everyone whom he has ever met.

Pinocchio is the titular main antagonist of the haunted maze attraction Pinocchio Unstrung at Knott's Scary Farm, the annual Halloween overlay for Knott's Berry Farm amusement park in California, loosely based on the 1883 book The Adventures of Pinocchio by the late Carlo Collodi. He is a living marionette that seeks revenge on those he met on his adventures.

Pinocchio was built by the old toymaker Geppetto, who wished he would come to life. The Blue Fairy came and granted Geppetto's wish, but Pinocchio wanted to be a real boy. The Blue Fairy instructed him that, with the aid of Jiminy Cricket, he was to carry out an adventure to prove himself worthy. Pinocchio went on an adventure (much like the one that transpired in the book), outwitting the likes of Stromboli, Monstro, and escaping Pleasure Island. After risking his safety, Pinocchio eventually returned home with Geppetto and Jiminy. However, even after all he did, the Blue Fairy saw a great darkness inside him and denied him his wish of becoming a real boy.

Pinocchio is maddened and shocked at this and spends the next twenty years in isolation until he drives himself mad. He betrays Geppetto, Jiminy Cricket, and the Blue Fairy and begins a mad killing spree, killing all those he encountered on the adventure that he now sees as pointless. Jiminy escapes, but Pinocchio kills Geppetto and rips his face off, then captures the Blue Fairy by hacking off her wings. Pinocchio decides to torture the Blue Fairy for many years. He kills Stromboli and Torchwick, and takes over Pleasure Island, killing any humans he comes across, cutting them up, and reassembling them into puppets and marionettes. He skins his victims and enjoys turning their skins into clothes that he wears. He controls puppets around the town, using them as minions and helpers.

Guests enter to find Pinocchio, holding the bloody and broken Blue Fairy in a closet, where she begs for mercy. Pinocchio explains his past, and how he will seek revenge on all those who left him trapped in his wooden shell. After chasing them away, guests travel through the old workshop and find all the old puppets, including the ones Pinocchio controls, and the mangled corpse of Geppetto, face torn off. As they enter the town, guests find it overrun with living puppets, which attack and scare them. They soon find an old marionette theater, where mutilated corpses have been reconstructed into dancing marionettes, and Stromboli's corpse hangs from the ceiling with his innards hanging out.

Soon, guests arrive at Pleasure Island, overrun with deformed puppets and children who have been turned into frighteningly disfigured donkeys, which Pinocchio keeps locked in cages. Other puppets are also locked in cages, danging from the ceiling.

Upon escaping Pleasure Island, guests encounter Monstro, who eats them. As they try to escape, they come across the corpses of all the fish and people Monstro has devoured. They also come across the Blue Fairy, who Pinocchio decided to finally throw to Monstro, crying and begging for help. Pinocchio attacks the guests as they escape Monstro, coming across Jiminy Cricket, who cannot help them. As the guests prepare to escape the town, Pinocchio shows off his greatest creation: a massive, living duplicate of himself made of human bones, skin, and cloth. It wields a hammer and attacks the guests right before they escape.

Pinocchio was once mischievous and playful, but had a strong desire to do what was right in order to achieve his dreams. However, after his wish was denied, Pinocchio became an insane, violent, and aggressive sadomasochist. He is driven mad with wrath and revenge, and is shown to be extremely relentless and brutal when taking it out on humanity. He has reached the point where he gains satisfaction from pain and torture, and will simply spread chaos as much as he can.

Pinocchio's evil also stems from his entitlement. He thought he deserved to be a real boy, and drove himself to madness all because the Blue Fairy denied his request. This proves that this version of Pinocchio is nothing more than a spolied brat who tortures and kills people for no reason. Even his anger towards those who crossed him becomes less just once one considers how he only killed them after the Blue Fairy denied what he thought was his right.

Pinocchio is a wooden puppet that wears brown shoes, green and gold clothes, and red ribbons. He wears a frilled collar and a sleeveless shirt, along with green leggings. He also wears a mask with an elongated nose, made of the skins of Geppetto and his other enemies. 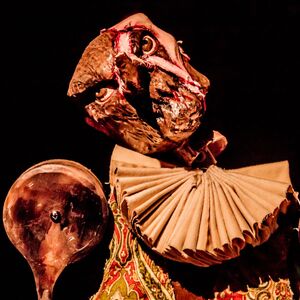 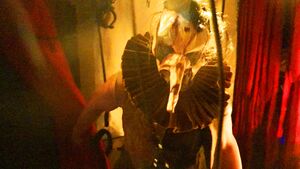 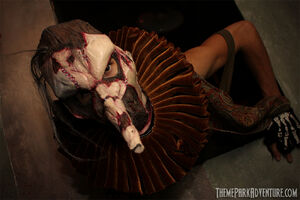 Pinocchio lunging at a guest. 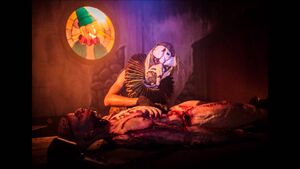 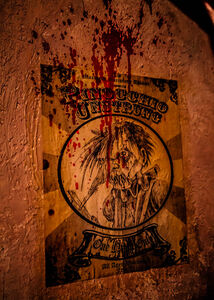 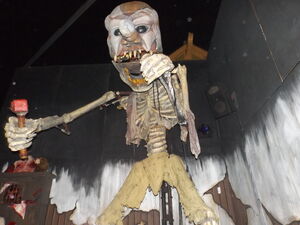 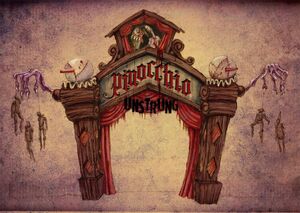 Attraction entrance art.
Add a photo to this gallery 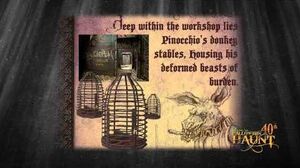 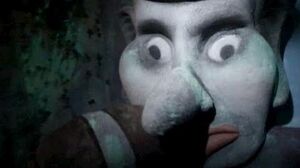 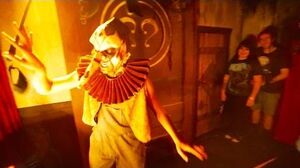 Retrieved from "https://villains.fandom.com/wiki/Pinocchio_(Pinocchio_Unstrung)?oldid=3969934"
Community content is available under CC-BY-SA unless otherwise noted.