Liar
Pinicchio is a famous fairytale character from the book The Adventures of Pinocchio. A parody version of him appeared in the Teen Titans Go! episode, "Books", where he was portrayed as a villain.

In "Books", Cyborg read the book The Adventures of Pinocchio, and thoroughly absorbed every word that the book had to offer and enjoyed it all immensely. After he finished reading the book, he wanted to read more. The other Titans all had the same problem so they looked for another book. They found Raven's Necronomicon and read a spell from it, which brought to life the characters from the books they had all previously read, and unleashed them into the world, as evil villains. Aside from Pinocchio, the other villains to be freed from their books were Benjamin Franklin, The Invisible Man, and a flock of Pelicans.

In battle, Pinocchio used his growing nose to poke Cyborg in his one non-robotic eye, while Cyborg held him away from his face, trying to keep himself safe and unharmed. However, no matter how far away Cyborg pushes Pinocchio, Pinocchio could just reach him again by growing his nose even longer. Cyborg had to defeat the villainous wooden puppet by providing a boring in-depth analysis of his book. Cyborg gave a bit of his interpretation of the story and what he thought of it.

Pinocchio made a cameo in "Real Boy Adventures", during Cyborg's "I want" song, "Real Boy", where Cyborg wanted to be a real boy. Pinocchio was very fitting here as he had similar desires in his own story.

Pinocchio is a short little wooden boy made out of yellow wood. His nose is made out of orange wood. He has a round head and black hair. He wears a pink hat with an orange feather on it. He also has pink overalls, a black bowtie, white gloves, and aqua slippers.

Pinocchio is a proud and shameless liar, who uses his number one sin as an attack against his enemies. He was shown to be needlessly brutal in his fight against Cyborg, even going as far as to tear his head off for no reason. 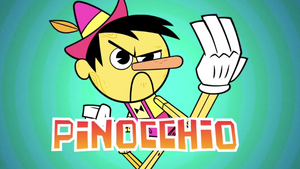 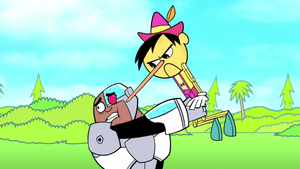 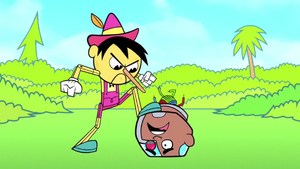 Retrieved from "https://villains.fandom.com/wiki/Pinocchio_(Teen_Titans_Go!)?oldid=3975267"
Community content is available under CC-BY-SA unless otherwise noted.