Pinnochio is a parody of the character Pinocchio from the classic story of the same title, and he first appeared in the episode "Nursery Crimes" of The Grim Adventures of Billy & Mandy.

When Billy and Mandy were sent by Grim into a magic tome known as the Supernatural Storybook of the Underworld to reenact the story of Hansel and Gretel, Billy tires of the story as he has heard it many times and wanders off on his own where he meets Pinocchio who invites him to Gepetto's workshop to play with him.

After exchanging a few jokes Pinocchio feels that Billy is laughing at him and not with him and tells him how it is not funny to make fun of someone for being made of wood, he then tells Billy about how he longs to be a real boy and asks him how he could become one. Billy who is not familiar with the story tells him to devour the flesh of a real boy which excites Pinocchio who then asks him if he can eat his flesh, he then chases Billy throughout the shop with a fork and knife until Billy lands in a cauldron.

After falling in he reads cookbooks on how to cook human flesh and Billy calls Mandy for help, eventually, Mandy comes to his aid and attacks Pinocchio with a wood shaver and when she is finishes shaving him he is shaped like a chair and Mandy gives him to the witch from the Hansel and Gretel story. She sits on him until she farts and accidentally breaks him under her weight.

He later returned alive and well with no explanation in Billy Ocean after Billy is swallowed by a whale he discovers that Pinocchio and his creator Geppetto are living inside the whale, Gepetto immediately takes a liking to Billy and decides to adopt him as his second son Pinocchio becomes jealous and repeatedly tries to eat his flesh like he had done earlier, Gepetto scolds him saying that he no longer considers him his son after he tried to eat Billy, Pinocchio later encounters the Blue Fairy who in the original tale brought him to life to give him advice but seeing as he is bent on revenge decides to let him deal with it.

Pinocchio later asks Geppetto if he still cares about him Geppetto replies that he does but he likes Billy better, later on he kidnaps Billy and ties him to a pole and lights a fire around him in an attempt to kill him Gepetto scolds him again the fire causes the whale to vomit them out, after escaping from the whale Pinocchio decides to leave Geppetto and encounters Captain Deadwood a pirate captain who is entirely made of wood after the whale ate his body parts it appears that he is going to adopt him but they go their separate ways, Billy tells Gepetto that he can't be his son because he has a real dad back at home leaving him lonely the whale tells him he could be his son and he climbs into the whale's mouth and they swim away. 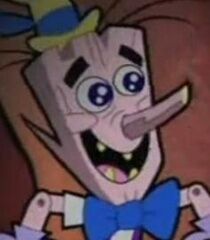 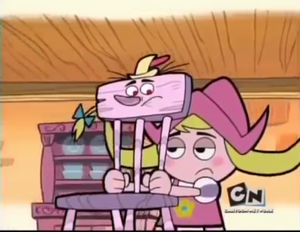 Pinocchio as a Chair
Add a photo to this gallery

Retrieved from "https://villains.fandom.com/wiki/Pinocchio_(The_Grim_Adventures_of_Billy_%26_Mandy)?oldid=4246186"
Community content is available under CC-BY-SA unless otherwise noted.