Raymond Tunstall, also known as "Pipes", is the main antagonist of the 1992 BBC Mockumentary Ghostwatch, during which a live T.V. broadcast is taken from a haunted house.

Pipes is a malevolent ghost who harasses a single mother and her two daughters. His name comes from his habit of banging on the plumbing.

As the program goes on and more is learned about Pipes, a better picture of what the ghost is takes shape. Dr. Pascoe, a parapsychologist, theorizes that Pipes is actually a collection of negative spiritual energy dating back for centuries.

The current Pipes takes the form of Raymond Tunstall, a mentally unfit child molester who killed himself on the property years earlier. It is implied that he himself was influenced by the previous incarnation of Pipes, the ghost of a murderous nanny named Mother Seddons.

Pipes never appears on screen clearly in the movie, but is said by the children to have an old mans face, while wearing layers of black dresses and petticoats. Pipes face is covered in scratches, and one of his eyes is completely eaten out. This was caused by Raymond Tunstall's cats, who ate it over the seven days it took someone to discover his body.

Pipes exhibits typical poltergeist behavior; knocking on walls, throwing things, causing cold spots, appearing in reflections/the background of scenes, leaving strange scratches on people, etc. Of these, the scratching is solely focused on the family's oldest daughter, who is scratched with sadistic enthusiasm. Pipes also has the habit of meowing like a cat whenever it does something particularly nasty. Over the course of the broadcast, Pipes grows bolder and more powerful, gaining the ability to posses people, cause wind to spontaneously blow, explode lights, and manipulate objects from hundreds of miles away.

Dr. Pascoe theorizes that this increase in power is because of the broadcast, and compares it to "a nationwide seance." Throughout the night, terrified people call into the studio hotline claiming that poltergeist activity is now happening in their homes, and the broadcast ends on the implication that, by watching it, you have let Pipes into your own home.

Pipes disguised as a curtain

Pipes behind a glass door 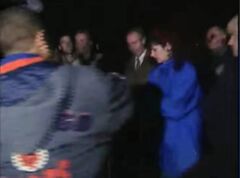 Pipes (right) hiding in a crowd undetected
Add a photo to this gallery
Retrieved from "https://villains.fandom.com/wiki/Pipes?oldid=3505008"
Community content is available under CC-BY-SA unless otherwise noted.