Thieves and/or Murderers (in Matoran language, near offensive)

Steal the Mask of Life.

Hostile Species
The Piraka are the main antagonists of the Bionicle 2006 storyline arc as well as one of the villains in the entire Bionicle series. They were a group of six Skakdi that had separated themselves from the Dark Hunters.

Shortly after Teridax was defeated by Toa Takanuva, rumors began to circulate about his "death". Six Skakdi Dark Hunters - Hakann, Vezok, Zaktan, Avak, Reidak, and Thok - decided to run off and investigate on their own, abandoning the Dark Hunters and instead calling themselves "Piraka", the Matoran word meaning "Thieves and Murderers". In Makuta's lair, they discovered both his crushed, uninhabited armor and a strange weapon called the Spear of Fusion. Hakann accidentally fired this weapon at Vezok when it was in reverse, splitting him into two beings; one still considered Vezok while Thok called the other a Vezon, the Matoran word for "Double". The other newly created being then took the name "Vezon". Just afterward, all seven mysteriously gained knowledge of the powerful Kanohi Ignika, the Mask of Life, hidden somewhere on the island of Voya Nui. All became dead set on finding the mask and claiming it, and the original group of six agreed to work together - though each planned to betray the others and claim the mask for himself. Vezon, on the other hand, abandoned the team and disappeared right after two giant Mana-Ko Rahi attacked. In the rush to get to the island he used an old Toa Canister to get to Voya Nui, taking the Spear of Fusion with him.

Upon arrival on Voya Nui, the Piraka pretended to be Toa to gain the help of the native Matoran, Hakann and Avak even going so far as "fighting off" a lava-rock monster that they themselves created and secretly controlled. Having gained the trust of the Matoran - except for six who had their doubts - the Piraka contaminated them with antidermis and put them to work building their stronghold and draining the volcano, Mount Valmai, where the mask is supposed to be hidden. In the meantime, Zaktan used the knowledge he gained near Makuta's armor to build a device that collected a kind of virus known as Antidermis. The Piraka then used Zamor Spheres filled with this virus to fully enslave the Matoran; however, the six suspicious ones managed to escape and began to work against the Piraka.

When the Toa Nuva showed up on Voya Nui, the two groups immediately got in a fight. Though it was a fierce battle, the Piraka ended up the victors and Zaktan ordered the Toa's masks and tools taken and the Toa themselves thrown into the volcano. But when the volcano erupted, the Piraka didn't want to risk their lives and instead left the Toa in the lava's path; the Toa were able to awake in time to escape with their lives (and their tools).

Relations between the Piraka - which were turbulent at the best of times - rapidly began to deteriorate. Hakann caught Zaktan secretly making deals with a giant stranger, Brutaka, who wanted the virus; Hakann then decided to take the Zamor Spheres so he could gain the giant's help for himself. Thok and Avak began to suspect that the Mask of Life was actually in the island's "green belt" that strangely thrived in the island's harsh terrain, and they turned on Zaktan. Eventually, it became an all-out brawl between the Piraka (minus Vezok); which only looked worse when the Toa Nuva and rebel Matoran invaded their stronghold, reclaimed their masks, and, as Toa Kopaka put it, "We heard you were trying to kill each other. We are here to offer our help in that long overdue endeavor." Zaktan then offered all of the Zamor Spheres to Brutaka in exchange for stopping the Toa Nuva, which he accepted. While the Toa Nuva were taken captive by Brutaka, the Piraka began to interrogate the Matoran.

Worried about Zaktan's powerful new ally; Hakann, Avak, Reidak, and Thok begin scheming against him. Meanwhile, the Matoran escaped, and in searching for them Vezok encounters a second team of Toa that recently arrived, the Toa Inika. Later, two of these Toa sneak into the stronghold but are caught by all six Piraka and Brutaka, only to have the rest of the team show up just as the fight starts. While the Toa gain an advantage, Hakann used a very special Zamor Sphere to try and steal Brutaka's power, cutting out his "allies" in the plan, but Thok intervenes and gets half the power for himself. The two use their enhanced powers to subdue the other Piraka and the Toa. After Hakann and Thok leave, having forced Brutaka to reveal the location of the Mask of Life, the Piraka and Inika strike an uneasy alliance to de-power the two.

Meanwhile, Hakann and Thok have started fighting each other. Hakann creates a blast with his heat vision that blows up half the island, which allows the Toa and Piraka to track him. The other Piraka attack Hakann, while the Inika engage Thok. The Piraka are defeated, except for Zaktan, who shifts out of the way as Hewkii fires the Zamor at Hakann and Thok. The Toa collapsed as a result of the Piraka's blast, but the sphere does its job. When the Inika woke up, the Piraka have headed down the tunnel to the Mask of Life.

On the path to the Mask of Life, the Piraka are horrified to discover monster of myth Irnakk, who quickly stops each Piraka with their worst fear brought to life - except for Zaktan, who is briefly absorbed into Irnakk's own mind (though he soon restored him saying:"You tasted stale, so I spat you out"). When Zaktan stood up to Irnakk, citing all the horrors he has had to endure from being a mass of protodites instead of a whole being, Irnakk was satisfied that he has conquered fear and uses it as a weapon, and allows the Piraka to pass.

After making their way through a number of other traps and tests, they entered the Mask of Life chamber ahead of the Toa Inika. Inside, they are surprised to find Vezon, who had reached the mask but is now cursed to be its guardian. Avak easily imprisons Vezon, only to find that the mask was imprisoned with him, fused to the back of Vezon's head. Vezon offers to negotiate on the condition that Vezok is killed - something the other Piraka are only too happy to do, but Vezok realizes that Vezon couldn't give up the mask even if he wanted to. Vezon then uses the Spear of Fusion to merge Vezok and Reidak into one being, commanding it to attack the others. By the time the Toa Inika arrive in the chamber, the merged being has soundly defeated the others, and when Vezon splits it apart into Vezok and Reidak again, they pass out as well.

While the Toa Inika fight Vezon, the Piraka recover but decide to stay out of the battle. Once the Toa win, the Piraka attempt to take the mask from them, but it flies away and quick action by the Toa allows them to get a head start in following it. Racing back to the island's surface, the Piraka plan to ambush the Toa Inika, only to see them joined by both the freed Toa Nuva and their ally, Brutaka's ex-partner Axonn, and a very dangerous looking Botar. Not wanting to pick a fight with twelve Toa and Brutaka's equal and a tall savage, they decided to lay low and wait for an opportune moment to strike.

While all this was happening, the leader of the Dark Hunters, the Shadowed One, was displeased with their betrayal, and thanks to Hakann (who betrayed the Piraka to him) he knew where they were. He sent Sentrakh to find and capture or kill the Piraka; and another team of Hunters, including Kraata-Kal, was being assembled. The Shadowed One had also sent Amphibax to monitor events from the seas surrounding the island.

Unknown to the Piraka, the waters below Voya Nui are mutagenic, and they were unknowingly exposed to this mutagen during their journey through the tunnel...

They were mutated into snake like beings with their own heads. They then killed all of the Zyglak in the Stone Cord and fought the Toa Mahri in which they were winning until an electrical attack stopped them. When the Toa Mahri asked where they were Axonn simply stated they had been taken care of. In fact, they had actually been taken for interrogation by the Order of Mata Nui. Though Zaktan was not likely give up the information he holds, The Order interrogated and would pry it from his mind if they had to. The Piraka were imprisoned on Daxia. When Daxia was destroyed, they survived and were fused with each other and other species when they were thrown in Energized Protodermis.

When they were members of the Dark Hunters, these six went on several missions, but only a few are known:

Each of the six Piraka was equipped with a dual-use weapon and a Zamor Launcher; the launchers were loaded with spheres full of the Antidermis virus that could enslave Matoran and make them mindless drones. Each Piraka also had a vision power, a unique personal power, and an elemental power; but they could not activate their elemental powers on their own (with the exception that Hakann, Vezok and Thok use these powers as "ammo" for their weapons). Two Piraka must combine their elemental powers in order to use them.

All of the Piraka came from the Skakdi species. The Skakdi had been given their vision and elemental powers through species-wide tampering by the Brotherhood of Makuta; it's unknown which of the Piraka's other powers are also due to this tampering (though we know that Zaktan's protodites were not). 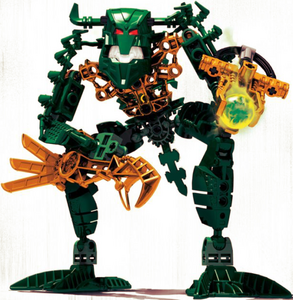 Zaktan, leader of the six Piraka 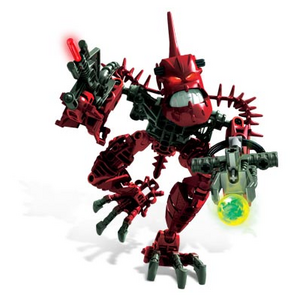 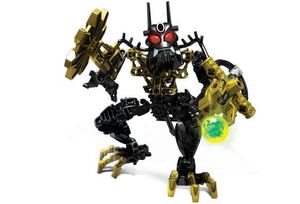 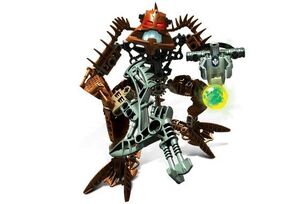 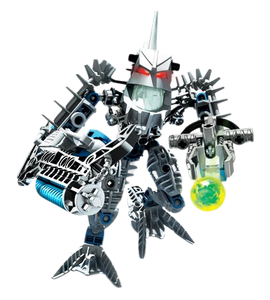 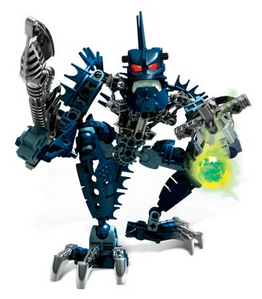