Former pirate captain (before his death)

Torturing Risky Boots because she took his crew.

Kill Risky Boots in vengeance for betraying him (both failed).

When he was alive, The Pirate Master was a feared captain, and was Risky Boots' former mentor. At some point, he attacked Sequin Land in his attempt to destroy every single genie there, but the genies combined their power to seal The Pirate Master away in a grave on an isolated island.

Following his defeat, Risky Boots inherited his crew, gears, and to rub salt in the wounds, she took his face to turn it into her bustier and belt.

As the light magic from Sequin Land begins to vanish, The Pirate Master begins to unleash curses on surrounding islands, which turns most of the Tinkerbats into Cacklebats, vicious beings with dark magic, and begins to gather dark magic from the dens of evil on the nearby islands.

Knowing the danger, Shantae is forced to work together with her nemesis, Risky Boots to seal the dens of evil. While they were successful at sealing the dens, they were unable to stop the revival of The Pirate Master. The vengeful captain captured his former mate and then fled to the Sequin Land Palace, with Shantae pursuing them.

Shantae fought the undead captain and appeared to have won, but the evil pirate stole back his gear and transforms into a giant, powerful being. With Shantae trying to defeat him and fails, The Pirate Master demands that she either gives him the Dark Magic, or else Risky will die.

Shantae begrudgingly agrees to his deal and release the Dark Magic, but it turns into Light Magic at that moment. Reabsorbing the magic herself, Shantae regains her genie powers and was able to weaken The Master Pirate, which allowed Risky Boots to fire Ammo Baron's cannon on him, destroying the villain for good. 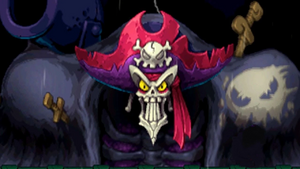