The pirate of the big city

Pirate
Beppo Pirato, simply known as Pirato by most people, is a one-time antagonist in the Austrian TV-show "Tom Turbo". He's a pirate-themed thief who is also a former classmate of Tom's arch-nemesis Fritz Fantom.

Pirato appears in front of the villain school, knowing that his former classmate Fritz Fantom has become a teacher here. Leaving the cage with his parrot Kapitano at the entrance, he enters the classroom as Fritz Fantom presents his students (all younger relatives of Tom's enemies) a device that can stop everyone around it in time save for the user. Before Fritz Fantom and his students can do something, Pirato activates the device and renders the whole class immobile. After taunting his former classmate, Pirato leaves with the device, only to realize that his parrot Kapitano has escaped its cage.

When he learns that a woman found his parrot, he rages at her doorstep, making her suspicious. She delivers the parrot to Tom Tom Turbo and his boss Thomas after she was attacked by Fritz Fantom's students on her way to Tom. Back on his ship, Pirato calls the woman, who dismisses his request to give him the parrot, but accidentally informs him of Kapitano's wherebouts. Pirato then breaks into Tom's garage, where he notices nuts and realizes his parrot was here. He climbs through the to Thomas' office, but realizes that Thomas has escaped to the carage using an elevator. Pirato tries to climb back, but Thomas locks the slide, trapping Pirato in the office.

After the parrot was stolen away from Thomas by Fritz Fantom's students, Thomas and Tom learn that the reason Kapitano is so important to Pirato is because it remembers the code for the lock of the store room on his ship where Pirato put all his loot. Fritz Fantom and the students are able to unlock it using Kapitano, but end up defeated as well when Tom and the police arrive.

In a short film featuring Thomas' file of Pirato, it's revealed that his first name is Beppo. 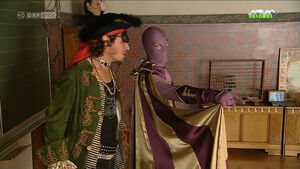 Pirato taunting his old rival Fritz Fantom after immobilizing him. 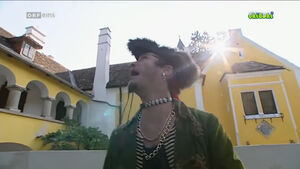 Pirato calls out for his parrot Kapitano after realizing it's gone 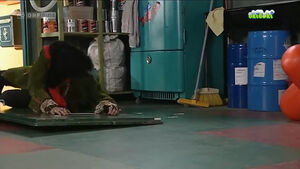 Pirato breaking through the door into Tom Turbo's garage 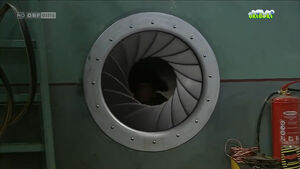 Pirato getting trapped in the slide to the office.

Thomas' file of Pirato revealing his first name to be Beppo.