Pisard (renamed Pijard in the English dub) is the first villain in Futari wa Pretty Cure and under employ of the Dusk Zone. It is partly thanks to him that the girls are able to transform into Pretty Cure. His human form is thought to be very handsome, even moving the main characters' homeroom teacher. He guards the green Prism Stone.

Pisard acts like an ordinary minion of the main villain, having no empathy or sympathy for innocent people, but is fearful and afraid of his leader's rage. It is shown that he thinks of himself extremely highly, and when he is given one last chance to defeat Pretty Cure, he does not kill them when he has taken Mipple; instead, he gives her back to Honoka so that they can fight him with their full powers in order to show his strength and quality to the others of the Dusk Zone.

His personality is slightly changed in the English dub. In this version, he is more focused in pride, and is shown to respect Pretty Cure's attempt to defeat him even though they are unable to transform at the time, while in the Japanese version he just wants to defeat them at their full power to show that he is the best.

Pisard is first seen walking through a crowd in his human form, when he senses Mepple moving past him. Following his energy to an amusement park, Pisard confronts Nagisa who is carrying Mepple and demands that they give up the Prism Stones. Conveniently, Honoka Yukishiro shows up carrying Mipple. Pisard uses this opportunity to seize Mepple while Nagisa is distracted, but is instantly thwarted after Nagisa bats Mepple away with her lacrosse stick. After he is recovered, Mepple and Mipple quickly instruct Nagisa and Honoka to change into Pretty Cure. After they transform, Pisard tries to best them in hand-to-hand combat, but is outclassed. Desperate, Pisard summons a Zakenna to possess a roller coaster, which is quickly defeated by Pretty Cure's finisher attack. Enraged, Pisard makes a hasty retreat back to the Dusk Zone.

In another attempt to secure the Prism Stones, Pisard assumes a human disguise and purchases an ordinary vacuum cleaner. He then summons a Zakenna to possess it and suck out the city's power supply in order to draw out Pretty Cure. Once they arrive, Pisard turns the Zakenna on them which manages to trap Cure Black on the sucking end, but Cure Black manages to free herself. Pisard quickly turns tail and flees the battle, but not before cutting a nearby elevator cable, sending the elevator plummeting down the shaft. Cure Black and Cure White leap into action just in time to save the elevator and finish off the vacuum cleaner Zakenna.

Trying the tactic of getting closer to Pretty Cure, Pisard disguises himself as a human once again and assumes the identity of a teacher's aide. Once inside the school, he hypnotizes the girls' teacher and orders her to bring Nagisa before him in the school's gymnasium. When Nagisa realizes the teacher's aide is Pisard, a fierce fight ensues involving many objects strewn around the gymnasium which are possessed by a Zakenna. Pretty Cure defeats the Zakenna and rescues the teacher. 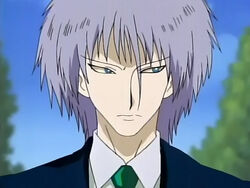 Pisard as a teacher
Add a photo to this gallery
Retrieved from "https://villains.fandom.com/wiki/Pisard?oldid=3551546"
Community content is available under CC-BY-SA unless otherwise noted.