The Pixie Dusters are supporting antagonists of Pixar's 22nd full-length animated film Onward. They are a group of hostile motorcycle fairies commanded by their leader Dewdrop.

The Pixie Dusters are first seen parking their motorcycles in the Swamp Gas area, where they attack an innocent customer who didn't know them, causing him to drop his soda. As Ian, Barley, and their father walk in, Pixie Dusters swarm the retail market. When Ian notices Dewdrop speaking angrily to his late father, the elf brothers and their father manage to escape after paying the shopkeeper to avoid a fight.

Later, as Laurel and Corey search for the boys, a Pixie is seen crashing through the windshield, surprising Laurel and Corey along with Colt, which also causes them to crash their truck. Afterwards, a group of Pixie Dusters arrive towards the injured member as they retreat to heal the injured sprite.

At the end of the film, the Pixie Dusters are seen playing darts in the reopened Manticore Tavern. 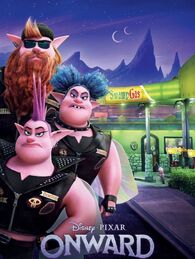 Dewdrop, the leader of the Pixie Dusters