Villains Wiki
Register
Don't have an account?
Sign In
Advertisement
in: Magic, Dark Knights, Doctors and Scientists,
and 31 more

Member of the Order of No Quarter

Knowledge of alchemy
Usage of bombs

Obtain the essences of the former members of the Order of No Quarter to create the ultimate potion (Succeeded).

Plague Knight is a major antagonist in the indie videogame Shovel Knight, as well as the main protagonist of the DLC Shovel Knight: Plague of Shadows. He works for the Enchantress as one of the eight members of the Order of No Quarter. He is encountered by Shovel Knight at the end of the Explodatorium.

Regardless of what Shovel Knight chooses to do, they are all shown in the epilogue during the credits, with some of them reforming and others paying for their actions. After Shovel Knight and Shield Knight defeated The Enchantress, Plague Knight then returned to the Explodatorium. There, he became a teacher for advance potions.

In the Plague of Shadows campaign, it is shown that Plague Knight has his own agenda, as he joined the order only to approach the other knights and capture their essences, which he planned to use to make the ultimate potion to impress his lover Mona. Dark Knight learns of his plans and attempts to convince him to stop, bringing Mona with him to the Tower of Fate. However, Plague Knight had already captured the Enchantress's essence, which made the potion unstable, so he is forced to fight a large monster which comes out of it. Upon defeating the monster, the potion stabilizes, but after being told by Mona that she already loves him, they decide to use it to blow up the Tower of Fate instead, which causes the citizens of the Valley to regard them as heroes, accept them, and allow them and their minions to come into town whenever they like.

Plague Knight appears in Super Smash Bros. Ultimate as a novice-level support spirit, which grants increased power to fire/explosive attacks. He can be obtained by scanning the Plague Knight amiibo or by defeating him in a spirit battle, which is against Doctor Mario on the Unova Pokémon League stage with increased fire and explosion power who is easily distracted by spawning Bob-ombs that are pulled towards him.

Plague Knight appears as a cameo character in Creepy Castle. 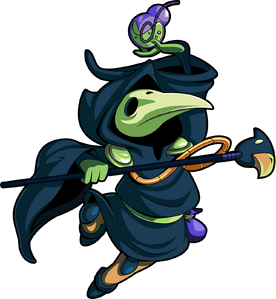 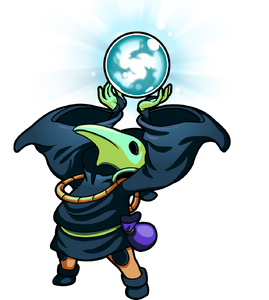 Plague Knight with an Essence. 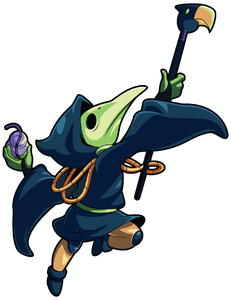 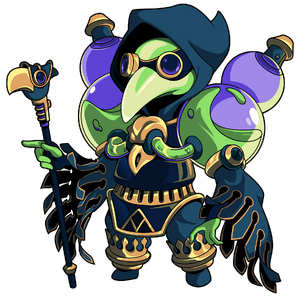