The Plankton Family are the secondary antagonists in the SpongeBob SquarePants episode "Plankton's Army".

They dress and act in the manner of a modern hillbilly. The majority of them can read except for Clem.

Unlike Plankton, they are not evil. However, they're perfectly fine with doing Plankton's evil bidding as long as he provides them with various rewards, such as memory for their laptops, an extra string for a banjo, matching boots, and most importantly for root beer (which seems to be their favorite beverage).

These Planktons first appeared in the episode Plankton's Army. Plankton invites them all to come to the Chum Bucket, thinking they will all be evil geniuses like himself. However, when they arrive, he finds out they are all rednecks, and comments that he's "been away from home longer than (he) thought."

He calls them to a meeting and gets them to agree to his plan in exchange for root beer. Plankton tells his family of his plan, as they ask what they get for helping. After a few reveal what they want, Clem asks for root beer and they all get excited as Plankton promises them as much root beer that they can drink, something that excites them.

At the Krusty Krab, Plankton uses a megaphone demanding the formula before threatening to destroy the restaurant. Mr. Krabs and Squidward confront him and Mr. Krabs asks how he will act on his threat. Plankton shows him his family, something Mr. Krabs mistakes for grass until he realizes his enemy has an army. This causes him and Squidward to run as the Plankton attack the Krusty Krab, tying up Mr. Krabs and Squidward in a toilet. The Planktons open the safe containing the Krabby Patty secret recipe. Before Plankton reads the recipe, Mr. Krabs pleads him not to read it, saying "There some things this world weren't meant to be seen by mortal eyes!" Plankton tells him he doesn't care and reads it anyway. The ingredients turn out to be:

At a loss of words, Plankton looks at Mr. Krabs who says he warned him as Plankton is horrified by this, and runs away screaming from the Krusty Krab and back to the Chum Bucket. The other Planktons read it and run away (except for Clem, who can't read, but Mr. Krabs orders him to get out).

The Planktons appeared as enemies in Creature from the Krusty Krab. Plankton becomes a giant and terrorizes the Bikini Bottom. For usurpation, the other Planktons have taken over the city.

The Planktons assisted cousin Plankton to build enormous robots of themselves and find a key to open the ultra secure safe that holds the Krabby Patty secret formula in Plankton's Robotic Revenge. Only two members are bosses in the game: Rainchild and Clem. 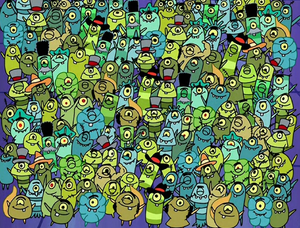