Leader of the Five Dastardly Bombers

Being with robotic lifeforms.

Plasma Bomber is an antagonist in the Bomberman series. The leader of the Five Dastardly Bombers, he serves under Buggler.

In Super Bomberman R, he was voiced by Yuto Uemura in the Japanese version, and by Chris Koprowski in the English dubbed version.

Plasma Bomber is the faux main antagonist of Super Bomberman 2, acting as the boss of the stages 5–7 and 5-8. He mainly uses plasma-bombs, which he can throw across the map. After being defeated, he commands the SkeleGuard, which can fire powerful electrical blasts and summon ghosts. He attempted to reach out to Bomberman upon second defeat, but is blasted back by G Ganzu.

Plasma Bomber returns in this game, although losing his leadership status to Phantom Bomber. He absorbed the Karabon Pommy Dragon to become PlasmaRock.

Plasma Bomber returns in Super Bomberman R, once again the leader of his group. On the groups landing on Planet Scrapheap, Plasma Bomber greets the group to try to defeat White, to no avail. After meeting up with him again, Plasma Bomber states his distaste for organic life, considering cybernetic life-forms superior. He first fights the group on foot, but switches to the Judge Gwinbee upon defeat. After this, he tries to take a worker's child hostage, but remembers his true purpose of protecting mankind.

After Buggler makes his black hole, he is fused along with his teammates into the Great Gattaida. After this fails, he joins forces with Bomberman to defeat him.

Plasma Bomber has a lime green body with yellow eyes and has a yellow thunderbolt emblem on his forehead. He also wears orange gloves and shoes and an orange electrical scarf.

Plasma Bomber is noble and honorable in nature, but is unafraid for underhanded tactics. Originally, he also thought that organic life-forms are not as superior as cybernetic life. 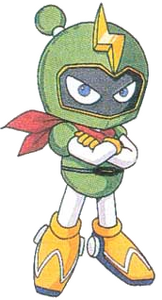 Plasma Bomber's design in Super Bomberman 2.
Add a photo to this gallery

Retrieved from "https://villains.fandom.com/wiki/Plasma_Bomber?oldid=3529634"
Community content is available under CC-BY-SA unless otherwise noted.