Member of the Brotherhood

Plasmus is a member of the Brotherhood of Evil, and an enemy of the Doom Patrol and the Teen Titans.

Otto Von Furth was a German miner. He and four other miners got trapped in a cave-in in a mine filled with a dangerous source of radium they were trying to acquire. His 4 colleagues died of radiation poisoning, leaving Otto the sole survivor, though he was heavily infected. He was taken to a hospital, but Captain Zahl broke in and kidnapped him. He took Otto to his laboratory to perform horrific experiments on him now that he had been exposed to radiation. He ended up turning Otto into a protoplasmic blob monster that was perpetually covered in extremely potent radiation.

Otto was enraged with what Zahl did to him. Despite his blobby body, his pain receptors were still fully functional, meaning he was left as a hideous monster in a constant state of catastrophic pain from being covered in chemical burns all over his body. Zahl was pleased at his creation and gave Otto to the Brotherhood of Evil to serve them. Due to the fate of being subjected to heinous experiments and turned into an inhuman monster constantly suffering pain from chemical burns, Otto became filled with anger and hatred. Under the new name of Plasmus, Otto agreed to serve the Brotherhood as long as being a criminal meant that he could cause destruction and kill people to vent his rage.

Plasmus proceeded to become a serial killer supervillain, rampaging around and killing innocent people in service to the Brotherhood. He killed people through his touch. Just by touching people, he could infect them with his radiation, causing them to slowly and painfully melt down into protoplasm. He took sadistic delight in watching his victims melt. He claimed at one point to have killed over 75 men and women, including at least a dozen children. He stated that the only joy he felt came from listening to their screams.

He was one of the villains responsible for destroying Bludhaven. Along with the other villains, he dropped the radioactive monster Chemo into the city, causing tens of thousands of deaths. At another point in the comics, he disemboweled Kid Devil, nearly killing the boy. He continued committing crimes and killing people until his death in Salvation Run, when he was used by Lex Luthor to power a teleportation device, which later exploded. 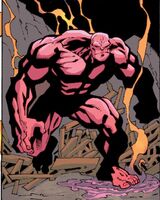 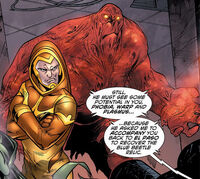 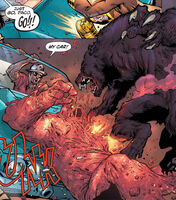 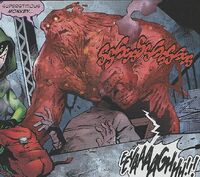