Elemental Humanoid
Plasmus is a major antagonist from the Teen Titans TV series. He's a giant monster made of goo who often causes chaos and destruction in the city.

Plasmus started out as a man with a condition that transforms him into a monster whenever he wakes up.

When Cinderblock broke Plasmus out for Slade to use, Plasmus' human form wakes up in shock to discover he's awake as hey says he's only human when he's sleeping. Slade, however, said that his human form is worthless to him as he said he needed Plasmus, who started to transform and consume toxic waste at a laboratory. Just then, the Teen Titans appeared and pinned him down, only for him to split into five smaller creatures of himself. He proved to be a formidable foe without Cyborg on the team. Robin was being chased by one of Plasmus' creatures who chased him onto a conveyor belt. At the end, lies a vat of acid in front of them. Robin manages to throw Plasmus' creature of the conveyor belt, but it then grabbed Robin by the leg and made him fell into the vat of acid with it. Just then, Cyborg appeared and saved Robin from falling, leaving Plasmus' creature to disintigrate into the vat of acid. After Cyborg re-joined the Titans, they were able to defeat Plasmus and make him fall asleep. Plasmus later appeared in several other episodes.

Plasmus' appearance changed after Starfire presumably destroyed him, and his essence fell into the pit filled with raw sewage from a football field. This process caused him to boil that acquired him green bubbles that, when popped, spat out acid.

When Terra joined Slade, she broke out Plasmus, Overload, and Cinderblock and placed disks upon their chests that puts them under Slade's control. They were used to weaken the Teen Titans before Terra finish them off. Cyborg and Beast Boy went after Plasmus at a chemical factory, where Plasmus was hiding inside a giant tank filled of chemicals before attacking them. They appeared once more and this time combined together and formed, Ternion, but were still defeated.

Plasmus shows up again to menace the Titans on their "last day" before Trigon's arrival. The titans confronted him, but he was defeated single-handedly by Raven, who projected her astral form into Plasmus' mind, rendering him unconscious.

Plasmus makes a cameo as a member of the Brotherhood of Evil.

Plasmus joined the Brotherhood of Evil and teamed up with Trident to capture Aqualad and Tramm.

As Plasmus tried to take on the Teen Titans and their new recruits, he tried to crush Beast Boy in his hand, but Raven flew into his body, causing him to explode. In the end of the episode, it is unknown if he was frozen alongside the Brotherhood of Evil.

It is a remake of the series episode, "Divide and Conquer", except in this version, it is said that Cinderblock is his brother and that Slade is his father.

In this version, they say Plasmus is a prune who can talk and instead of a chemical plant, Plasmus attacks a prune juice factory and drinks prune juice instead of chemicals to make himself bigger. This version also shows that Plasmus' human form likes taking baths as when Plasmus was defeated by Cyborg and Robin, both heroes comment how filthy his human form was and wonder if he ever takes a bath.

Plasmus is tall and made out of a dark red chemical substance with two small green eyes, slouching arms, a slobbery mouth, but no skeleton. In his second appearance, Plasmus becomes thinner, the top part of his body becomes round with several green bubbles for eyes on his head, his skin becomes less wrinkly, his fingers and feet become pointy, and has teeth. His human form is a skinny young man in his early 20s-30s with shaved hair and who wears only black Speedo breifs. Plasmus' body grows bigger and becomes stronger whenever he drinks chemicals, which one time his appearance changed after his entrails falls into sewage waste. Plasmus is capable of absorbing things into his body such as weapons and attacks by his enemies and also capable of stretching his limbs. In his new form, he now contains acid inside his body and can trap people inside his green pseudopod eyes. In the episode where Plasmus first appeared in, after the Teen Titans managed to pin him down, Plasmus escapes by separating his body into smaller creatures of himself. These creatures made from his bodies are his minions that Plasmus sent them after the Teen Titans who each chased a Titan separately. As they chased the titans, the creatures made grunting sounds, unlike the original Plasmus who screams and whales. One creature of Plasmus is a head with several small legs underneath him that is the leader of his minions. Another creature of Plasmus has a long, thin snakelike appearance with only a mouth that went after Starfire. A third creature of Plasmus has a squidlike appearance with only a small green eye that went after Raven. A fourth creature has a round crablike appearance with a wide mouth that went after Beast Boy. A fifth creature of Plasmus also had a crablike appearance, except it had a claw for a head that went after Robin and chased him onto a conveyor belt. That creature was disintegrated after it fell into a vat of acid. As for the other Plasmus creatures, they managed to capture the other Teen Titans until Cyborg and Robin defeated the head creature that causes the other creatures to melt. 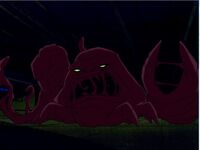 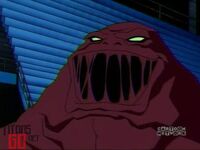 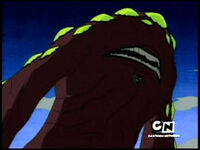 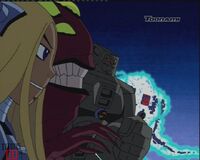 Plasmus with Terra, Cinderblock and Overload