Supervillainous Mutant
Otto von Furth, better known as Plasmus, is a major antagonist from Teen Titans Go!. He was a cave miner, who got mutated by toxic chemicals, turning him into a giant, reckless monster.

He was voiced by Greg Cipes.

In "You're Fired", Plasmus recklessly attacked a distant planet that had a massive nuclear core on it. The nuclear core was very sensitive and if it was destroyed, the whole planet would be vaporized. Plasmus started punching the core, in hopes to blow it up, giving himself a massive amount of power. The Teen Titans showed up and tried to stop them, but Beast Boy stopped to think about what kind of animal he should turn into when fighting Plasmus. He took a ridiculously long amount of time to think about this, while his teammates got beaten up, as they could not defeat Plasmus, without the entire team, being present. When Beast Boy finally settled on what animal he wanted to turn into, Plasmus landed the fatal punch on the nuclear core, blowing the planet to smithereens.

Plasmus showed up later in the episode, attacking Jump City back on Earth. The Teen Titans fought with Plasmus but required the assistance of Jayna from The Wonder Twins. Jayna took on the form of a rhinoceros and Zan intentionally sabotaged her heroism, by taking on the shape of ice, causing Jayna to slip, while charging at Plasmus, and fumble. The Titans were slammed against a wall and, once again, failed to defeat Plasmus.

In "Nose Mouth", Robin dreamed that Starfire was surrounded by Plasmus, Control Freak, Kyd Wykkyd, and Killer Croc, so Robin came in and saved her by beating all the villains up.

In "Some of Their Parts", Plasmus was seen in the pile of defeated villains, that had all been beaten up by the emoticlones of the Titans.

In "I'm the Sauce", Robin invited Plasmus, along with Trigon, Killer Moth, Cinderblock, Brother Blood, The H.I.V.E. Five, Kyd Wykkyd, Control Freak, The Brain, Monsieur Mallah, Blackfire, Muscle, Flex, Terra, Doctor Light, Mother Mae-Eye, and Kitten over to the Jump City Weapon Storage Building to play rainy day games with him. Plasmus played rainy day games with them. He was able to point out Mother Mae-Eye as the woman who put his thumb down in the heads up game. In the end, he got a carton of chocolate milk.

In "The Titans Show", Plasmus was one of the villains watching The Titans Show. He fought against Starfire on the battlefield. Starfire blasted Plasmus with lasers and made a bunch of holes in his body, but Plasmus was able to regenerate and turn himself back to normal. Raven later rode on a cyborg dinosaur and fired an explosive bullet into him. The bullet caused Plasmus to explode.

In "Flashback", Plasmus was shown, via flashback as one of the first villains that Robin (unsuccessfully) fought. Plasmus robbed a train, carrying cans of toxic acid and drank the acid, making himself mutate and grow. Robin tried to stop him but Plasmus crushed him under his foot and kicked him away.

In "The Viewers Decide", a flashback showed Plasmus repeatedly smashing Bumblebee against the pavement with his first, while Beast Boy and Raven went on a date and did nothing to help her. 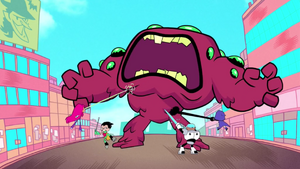 Plasmus in a typical fight with the Teen Titans. 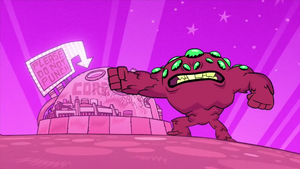 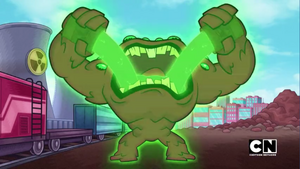 Plamus mutating himself with nuclear acid. 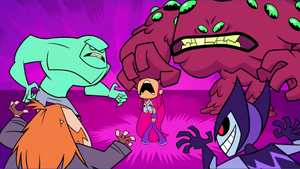 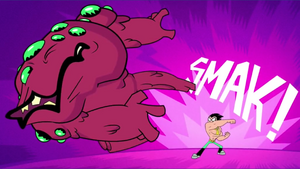 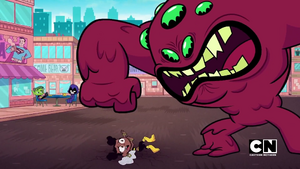