Hanging out with Niko (possibly)

Bring justice and goodwill to the world (failed).

Trey Stewart (February 11, 1983 - April 2008), better known as Playboy X, is a character in Grand Theft Auto series who appears as a main character, later a supporting antagonist in Grand Theft Auto IV, and a minor character in The Lost and Damned. He is the head of crack cocaine distribution in northern Algonquin, Liberty City, and aims to bring justice to the city and, possibly, the world too. However, his tactics and overall personality are often very underhanded.

He was voiced by Postell Pringle.

Playboy X, born as Trey Stewart, was born in 1983. At some point between 1988 and 1999, he was mentored by Dwayne Forge on how to deal drugs, and taught him the secrets to his own distribution empire. In 1999, Dwayne was incarcerated and Playboy took over his distribution industry. In 2004, he stopped visiting Dwayne in prison, and abandoned him, having no more ambitions to run with him. It was also likely during that point that X decided to expand the business into legitimate sectors, such as construction.

In 2008, Playboy was contacted by drug dealer Elizabeta Torres to help her protect a sale of cocaine with hired gun Niko Bellic, and biker Johnny Klebitz. In Schottler, where the deal is set up, they find out that the buyers are actually undercover LCPD officers, and he and Niko fight their way to the top of the building to escape, killing numerous NOOSE agents.

A few days later, Playboy calls Niko and asks him to help him in getting rid of a bunch of Mafia soldiers on a construction site in Castle Gardens. It is also during this time that Playboy's mentor, Dwayne Forge, is released from jail. While driving to the site, Playboy reveals his plan to gain favor with famous developer Yusuf Amir by killing all the Mafia men on the site, as they represent the labor union shutting the site down. Niko eventually kills the Union leaders, while Playboy attempts to persuade Amir into joining him.

Eventually, Playboy pays Niko to help Dwayne rebuild his life. He also hires Niko to murder a small drug dealer who has been inconveniencing him. After that, Dwayne has Niko kill the Trunchez Brothers (who are also Playboy's business partners) who took over a strip club he owned before he was jailed. This angers Playboy, who later tells Niko to kill Dwayne, who also orders Niko to assassinate Playboy.

If Niko kills Dwayne, Playboy pays him $25,000. Possibly having had a change of heart, Playboy tells Niko that Dwayne was like a father to him, and tells him to just stay away from him, and the two never speak again.

If Niko goes to kill Playboy, he will attack Playboy's gangsters before cornering him in an alleyway, in which Playboy tries to shoot him, but, finding his gun empty, surrenders and begs Niko for his life. Niko simply shoots him, and is granted the deed of Playboy's penthouse. Afterwards, Niko is given the option to become friends with Dwayne.

Playboy X does not always know what he is talking about, like when he told Niko Bellic that Dubai is in Africa, and that Africa, America, and Dubai are the same (Pointing out that Yusuf Amir was raised in Africa when he was raised in Dubai) and judges Johnny Klebitz for racism, when Johnny is not a racist, just because he's in a biker gang.

He is also a cowardly milksop, an example is first threatening to kill Niko but runs away from him instead as soon as Niko takes out his pistol, then after Niko captured him, Playboy tried to convince him into thinking that he showed him the world and "changed the game". 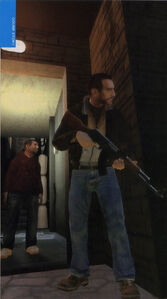 The beta version of Playboy X, wearing a much less colorful jacket. 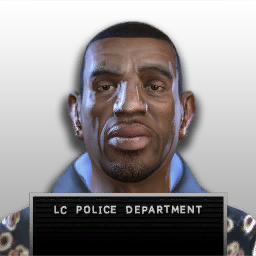