Scare people off in order to leave him and the lake alone (anime; formerly).
Keep the Dombler Lake peace and quiet (anime; succeeded)

He was voiced by Kinryū Arimoto in the anime.

After Zack hears about the show's secret, Gerry kidnaps him and is given the power to EM Wave Change by Hyde. He agrees and Hyde gives him an anicent Star Carrier and wave changes into Plesio Surf. Seeing the opportunity to boost his ratings for his TV show. Plesio Surf poses as the legendary Messie and attacks the Mess Village. Mega Man appears and defeats the monster.

Later in the game, multiple copies of Plesio harass everyone on Earth and Plesio Surf returns to Mu continent, using a Murian to perform an wave change tries to stop Mega Man, but is defeat once again.

In the anime, Plesio appears as a resident UMA on Dombler Lake and likes being alone and silence. However, there were rumors spreading around about a creature called "Dossy" that surfaced in the lake. Since then, people come and visit the near lake to look for "Dossy". When Gerry arrives with his crew to investigative about the creature, he takes control of him, wave change into Plesio Surf and starts scaring people off.

When Mega Man and Harp Note arrive at the lake, Plesio appears and attacks the people who come to see "Dossy". Mega Man and Harp Note confronts the creature and has agree to stop his chaos. After the event, people started to believed that "Dossy" left the lake and with Plesio, who was now satisfied with his peace and quiet has returned to his home.

Plesio Surf will always begin the battle with two stones in the area. One will constantly move from side to side to obstruct the player. 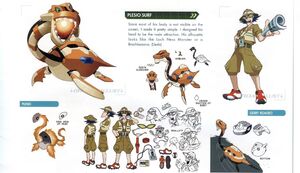 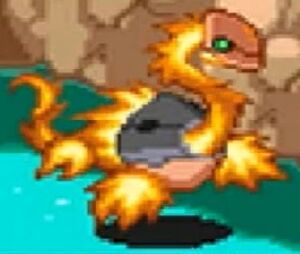 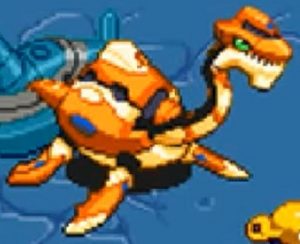 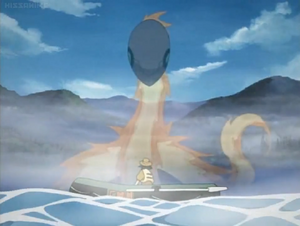 Plesio in the anime. 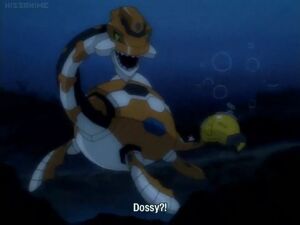 Plesio Surf in the anime. 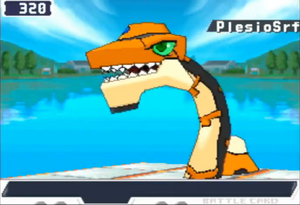 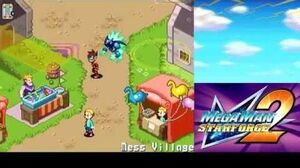 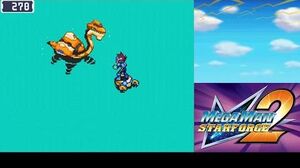