Flight
Inflicting sleep
Trapping those in her dream world

Plumeria is voiced by Yui Horie in Japanese and by Nicole Gose in English.

Plueria is a fairy-like creature called a Dökkálfar. She has light skin, red eyes, long grey hair, and butterfly-like wings.

She wears a revealing black and velvet dress, black boots, a vine-like headband and an accessory that ties her hair into a ponytail.

Her weapon is the Flower of Plenty, which can allow her to cast dark projectiles. She also has the Sweet Dreams ability.

Before she was a dökkálfar, Plumeria was a normal human child. Due to her parents not caring for her, her mother eventually set her inside a well and abandoned her. Freyja eventually found her and transformed her into her current form, but Plumeria gained severe hatred of humans for this.

Plumeria first appears at the end of the third chapter of Book IV. When Peony demands she stops forcing terrible dreams on people, Plumeria tells her that it's too late and they are already in deep in her dream and that they are enthralled and crushed under it. She then says Peony and company will be put through this fate as well. After being defeated here, she curses the protagonists and plans to bring along Triandra when they meet again.

In the next chapter, she and Triandra discuss their plans and hoping that Freyja would be satisfied with their work. She also mentions that Ljósálfheimr isn't all that bad, although she does dislike the humans there. Later on, she and Triandra go to the palace to try and kidnap Frey.

In the sixth chapter, she heads to Askr to try and find the Dökkálfheimr. She notes the familiar landscape, but brushes it off.

In the eighth chapter, she captures the heroes in her dream world, playing off their desires for love. Despite the heroes being affected, they defeat Plumeria. Plumeria later returns to fight again at where Freyr is kept. Peony again demands her to stop her evil deeds, but she comments that nightmares are why she exists. Following this fight, Plumeria hears her past self's voice crying out for her mother and Freyja's wounds are healed. 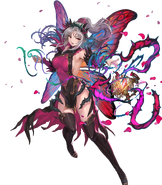 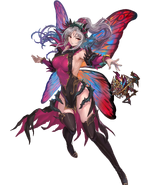 Retrieved from "https://villains.fandom.com/wiki/Plumeria_(Fire_Emblem)?oldid=3792128"
Community content is available under CC-BY-SA unless otherwise noted.