The PlushBabies are the secondary antagonists of the survival horror game Five Nights at Freddy's VR: Help Wanted and its DLC Curse of Dreadbear. They are plush versions of Circus Baby.

The PlushBabies first appear in the Dark Rooms level, where the player must shine their flashlight on them to repel them until 6AM. Failure to do so will result in a jumpscare.

In Circus Baby's Nightmare level, the player must avoid Baby by hiding in closets. If the player closes the door for too long, several red PlushBabies will start twitching violently, and eventually kills the player.

In their Blacklight level, the PlushBabies, now resembling Scrap Baby, must be fended off with the flashlight again, just like in the Dark Rooms.

The PlushBabies reappear in the Curse of Dreadbear DLC, in the Plushkins Patch level, once again functioning the same as in the Dark Rooms and Blacklight levels.

The PlushBabies simply look like versions of the regular Circus Baby, but with different-colored dresses: red, yellow, and blue. In the Blacklight level, they are stitched together to resemble Scrap Baby.

Much like the Bidybabs from Sister Location, the PlushBabies have indistinguishable personalities. They all act similar to Baby, albeit with higher-pitched voices. However, their laughter seems to indicate a somewhat sadistic side. 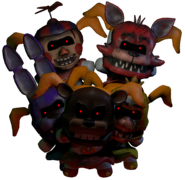 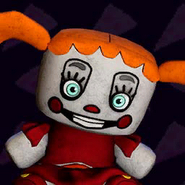