Sitting on the chair.

Plushtrap is a minor antagonist in the Five Nights at Freddy's franchise.

He is a plush version of Spring Bonnie. Unlike the other animatronics, he does not actually kill the protagonist, only serving to prevent the nights from going on quicker.

Plushtrap is featured in a post-night minigame. Using a flashlight, the hallway can be illuminated to Plushtrap. Catching him on the white "X" allows skipping 2 hours the next night.

However, if the timer is to run out, Plushtrap gets out of view, or further, than the X, the minigame ends with no bonus.

Also, if the player is not attentive enough, Plushtrap will scare him, and the bloody screen will appear all over.

Plushtrap returns as an antagonist in Five Nights at Freddy's: Ultimate Custom Night. Rather than being customizable, Plushtrap will instead be randomly spawned in by Dee Dee or Shadow Dee Dee. Once spawned in, you will be able to observe him on the security camera. He will usually be sitting on the same chair he sits on in Five Nights at Freddy's 4, however, if he moves the player must close the left door to prevent him from jumpscaring them, resulting in a game over.

Plushtrap returns in the Dark Rooms level of Five Nights at Freddy's VR: Help Wanted. The player must keep track of him as he sits in a chair. When the focus is not on him, he will begin to sneak around going in various hallways trying to hide from the player. The player has ninety seconds total for the game and must shine the flashlight on him when he is sitting on the red X to successfully complete the game. Once his level is completed successfully, the player unlocks Nightmare Balloon Boy's level.

Plushtrap also appears when a player wins a prize for completing a level, sometimes if a player does not get an actual prize in the prize box they may get a jumpscare by Plushtrap instead, however this does not result in a death.

Plushtrap appears in Five Nights at Freddy's AR: Special Delivery as one of the animatronics of the Fazbear Funtime Service. His mechanic is completely new, and relies on a mixed reality support, taking the player in completely new building. At either side of the wall there are two generators, and the shock button must be used on them to fill up the meter behind the player until it's green. The meter, however, will start decreasing if not constantly shocked, and too much shocks can just deactivate the generators. During this time, Plushtrap will slowly move towards the player when the light flickers. Plushtrap will then stand on a puddle. If the meter is green for both generators, then the player can shock Plushtrap to defeat him. Otherwise, the game will end with a jumpscare.

In the teaser image, the words "Terrible things come in small packages" can be clearly seen, which refers to the size of him (if the image is brightened up, it can be seen that he is about hip height, sitting in a hallway).

Indeed, like his counterpart, Plushtrap appears as a rotten, decayed little animatronic whose looks like a rabbit. He has enormous eyes with blacks pupils and two rows of sharp, white teeth. Plushtrap is surprisingly strong despite its small size and can easily overcome the child if he fails to stop him on time. However, Plushtrap appeared much more frightening in the teaser.

As Frost Plushtrap, Plushtrap has its body become that of one made out of ice, with large icicles jutting out behind his head, torso, and arms. Its eyes also become light blue in color.

As Piranha Plushtrap, Plushtrap's body changes to that of being made of fish-like skin, with it also having dog-like teeth, neon-blue eyes, orange webbing on his head, hands, and feet, barnacles on his ears, orange spines, an exposed rib-cage, and algae stuck to its body.

At first, Plushtrap appears as a harmless, albeit quite frightening plush, but once the protagonist turns off the light, he shows his real nature, being an extremely malevolent dangerous and mischievous trickster.

Plushtrap only moves when there are no lights. Once the hallway is illuminated, Plushtrap will not move anymore. However, he can quickly hide behind one of the four adjacent rooms; if he does so, the player automatically loses the minigame.

Plushtrap is the only animatronic that does not truly harm the protagonist, though it does frighten him. Why the protagonist is playing the game, how it affects the time, and his ultimate role is unknown. 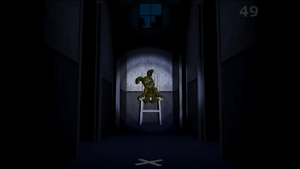 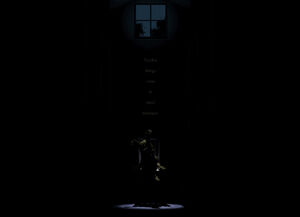 A teaser image for Plushtrap. 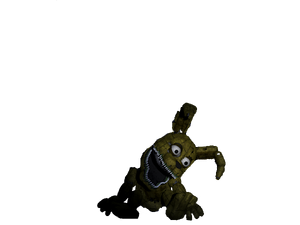 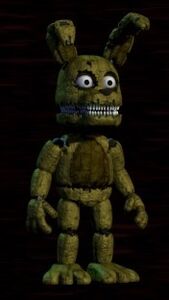 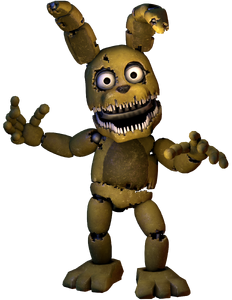 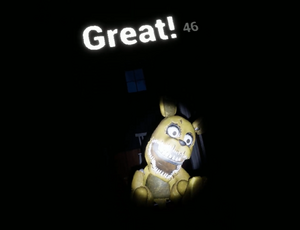 Plushtrap in Five Nights at Freddy's VR: Help Wanted after completing his level in "Dark Rooms". 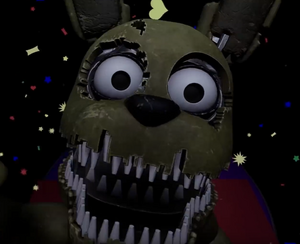 Plushtrap jumpscaring the player in Five Nights at Freddy's VR: Help Wanted in his minigame.