King of the Underwold

King of the Underworld

Kill all of humanity due to constant human-made pollution (failed).

Pluton (in Japanese: 冥界王プル豚, Mēkaiō Puruton) is a minor antagonist and anime only villain in the anime/manga One Punch Man. He is a powerful Mysterious Being and resides underneath the Earth's crust. He is categorized by the Hero Association as a Dragon Level threat.

He was voiced by Lex Lang in the English dubbed version.

Pluton is a gigantic pig-like creature with red eyes and tubes running from the side of his nose and neck to his shoulders. His skin is dark with grey and red sewn patches. He wears red pants and a shirt with green, yellow, brown and grey patches sewn together over with is a rib cage with his shoulder decorated with skulls.

Exactly like the other kings, he is a greedy, power-hungry tyrant who wants to take the over-world for himself, taking immense satisfaction in the deaths of several humans he slaughtered.

Pluton is awakened by the constant pollution on Earth and appears in Y-City where he wreaks havoc. He was about to kill a defenseless child but Genos arrived in time and saved the kid before he introduced himself to Pluton, buying some time for Saitama to appear and eliminate the monster, but the latter eventually cries out and curses the heavens as his life returns to one-punch defeats.

Enhanced Nostrils: It appears Pluton has the ability to suck surrounding debris with his powerful nostrils, assuming that is how he destroyed a large portion of Y-City.

Immense Strength: Pluton possesses colossal strength fitting his size and was able to easily destroy a large portion of Y-City. 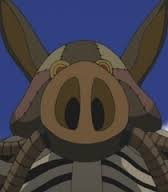 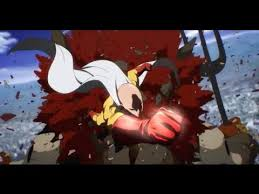 Pluton's Death
Add a photo to this gallery 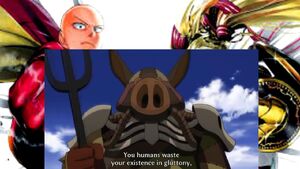 Retrieved from "https://villains.fandom.com/wiki/Pluton_(One_Punch_Man)?oldid=3891302"
Community content is available under CC-BY-SA unless otherwise noted.