Po Kong, also known as the Demon of the Mountains, is a minor antagonist in the TV series, Jackie Chan Adventures.

She is a powerful monster with a deep baritone voice, lust for power, and huge appetite for human flesh. She is one of the eight Demon Sorcerers and the largest out of all of them.

The Demon Sorceress of Mountain, she was banished by the Immortal Zhang Guo Lao. Po Kong's portal is located in her former domain of Japan. It is, like several other doors, contained within a regular door. When she was released, she attempted to devour Jackie. However, she was overwhelmed by an army of Jades created by a faulty cloning spell. Using a drum found at the site, the Chans then banished her once more. Po Kong is the largest demon in the group. Po Kong appeared in Demon World (Part 2), where she rules Japan and forces many to work in salt mines for her meals. She attempted to devour them again. However, Tohru was enslaved in her domain, and aided the Chans by banging on a nearby drum to banish her. Po Kong's Chi was located in the Canadian city, Quebec, within a pair of chopsticks, made from the Immortal drumsticks that banished Po Kong. 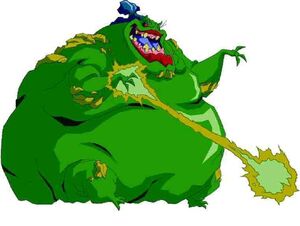 Retrieved from "https://villains.fandom.com/wiki/Po_Kong?oldid=3634549"
Community content is available under CC-BY-SA unless otherwise noted.