Chairman of the Hyper-Communications Cartel

Senator of Ando
Member of the Separatist Council

Political power and leadership within the Confederacy

Managing the communications cartel and propaganda broadcasts in the galaxy.
Broadcasting Pro-Separatist and Anti-Republic propaganda throughout the galaxy.

Lead the Confederacy and the war effort against the Republic.

Maintain and lead the communications cartel and messages.
Broadcast Pro-Separatist and Anti-Republic propaganda broadcasts in the galaxy.
Overthrow the Galactic Republic and replace it with a more noble government.

Po Nudo is a minor antagonist in the Star Wars franchise. He was a male Ualaq Aqualish politician from Ando. He was originally a Senator for the Ando System and was a member of the Galactic Senate but left the Senate and defected from the Republic during the Separatist Crisis. After he and his homeworld seceded, he joined the Confederacy of Independent Systems and rose to become one of its leaders as a member of the Separatist Council.

Po Nudo was born on Ando in the Mid Rim of the galaxy. A male aqualish, Nudo was elected to be a senator and the representative of the Ando Sector to the Galactic Senate during the final years of the Republic. As a senator, he was a vocal critic of the Supreme Chancellor, Finis Valorum, and vocally opposed the taxation of the until then free trade zones. In addition to the proposal, Naboo Senator, Sheev Palpatine, had proposed that the money be sent to the growth of planetary systems in affected areas.

Nudo was opposed to the idea as well along with fellow senators Toonbuck Toora and Wat Tambor. In 32 BBY, Po Nudo took part in a senate gathering where he supported the Vote of No Confidence against Valorum in response to his lack of action against the Trade Federation during its blockade and occupation of Naboo. Senator Palpatine soon rose to power and became the new chancellor but, Nudo had grown too disillusioned with the Republic.

In 22 BBY, at the height of the Separatist Crisis and with the galaxy on the eve of war, Po Nudo had traveled to the Outer Rim and landed on Geonosis to attend a meeting between Separatist leader Count Dooku and other secessionists who pledged allegience to the Confederacy. He attended the meeting with his assistant and was present with Dooku as well as other Separatist leaders such as Nute Gunray of the Trade Federation, Geonosian Archduke Poggle the Lesser, Wat Tambor of the Techno Union, San Hill of the InterGalactic Banking Clan, Passel Argente of the Corporate Alliance, Shu Mai of the Commerce Guild, and Tikkes of the Quarren Isolation League. There, he signed the treaty along with the other leaders and officially defected from the Republic. He remained on Geonosis when the Grand Army of the Republic had arrived and rescued the survivng Jedi who came to rescue Obi-Wan, Anakin, and Padme from Separatist captivity and declared war on the Republic and amassed the Separatist Droid Army during the battle but, eventually fled Geonosis when the battle turned sour for the Separatists so he could lead the Confederacy in the Clone Wars.

Following the outbreak of the Clone Wars, Po Nudo joined the Separatist Council in leading the Confederacy to war. He was put in charge of the Hyper-Communications Cartel during the early days of the war by Wat Tambor and San Hill and was put in charge of broadcasting Pro-Separatist and Anti-Republic/Anti-Jedi Propaganda throughout the galaxy and operated in the same way that the HoloNet of the Republic did. Nudo had financed and supported the construction of Skytop Station deep in the Ruusan System. After the station was complete and fully operational, he toured the facility with Confederate Head of State Count Dooku and his Dark Jedi Assassin and Apprentice, Separatist Commander Asajj Ventress  to show the new station off. Despite the security situation however, Jedi Knight Anakin Skywalker and his Padawan Ahsoka Tano infiltrated the station with a clone task force and destroyed it.

Retreat to the Outer Rim

As the war was waged across the galaxy and dragged on, Po Nudo would eventually return to his homeworld where it was caught up in a civil war between the Separatist-backed government and the Pro-Republic Andoan Free Colonies. The war on the planet had forced the counciler to retreat and he would eventually regroup with other members of the Separatist Council and recieved protection from General Grievous. He joined the council on his flagship, the Invisible Hand, and they fled all across the galaxy in search of a new planet to claim as their headquarters as the Separatists were pushed back to the Outer Rim and it was under siege by the Republic forces as well. Nudo and the other councilors would eventually find refuge on Utapau after its invasion and subjugation by the Separatist forces.

After Utapau was invaded and annexed into the Confederacy, Nudo and ther other Separaitst Council members got out and established their base of operations on the sinkhole world and made it their new headquarters. While on the planet, Po Nudo joined up with the other Separatist leaders where they oversaw the Separatist attack on Coruscant and when the chancellor was taken by Grievous, they celebrated for a brief period of time knowing that victory was afoot but, Palpatine would be rescued by Obi-Wan Kenobi and Anakin and to make matters worse, Dooku was killed and the Separatist forces were forced to retreat.

End of the War

After the Separatist forces retreated from Coruscant, Po Nudo and the rest of the Separatist Council remained on Utapau briefly after Grievous had returned from the Republic capitol. He would eventually have the entire council gathered for a meeting where he would have them all sent deep in the Outer Rim to the firey world of Mustafar where they'd be safe and away from Republic capture. Nute Gunray, the council's leader, objected to the plan but, he and the other councilors, including Nudo, went along with it and they got on a ship and flew to Mustafar. After their withdraw, Utapau was attacked and invaded by the Republic forces moments afterwards and were able to avoid capture fast. Po Nudo would eventually arive at Mustafar and he and the other councilors went into the Klegger Corp Mining Facility and stationed themselves there.

After arriving on Mustafar, Po Nudo would remain in the Separatist Council war room where they would remain in hiding and avise and monitor the last moments of the Clone Wars. After the news got out that Grievous was killed on Utapau, the Separatist Council took over as the new leaders of the Confederacy and Nute Gunray became the new head of state. Nudo would gather for a message from the Sith Lord Darth Sidious where he congraduated the Separatist leaders for their loyalty and services to him and would send his new apprentice, Darth Vader, to "take care" of them. Nudo would remain in the war room, advising the Confederacy and their forces during the final campaigns of the war. Vader would eventually arrive shortly after the execution of Order 66 and he was greated nicely by the council but, he quickly locked the room's doors and procided to cut down and kill all of the Separatist leaders. Nudo had a protective chest plate but, it was no use as Vader's lightsaber cut through it and killed him instantly.

After Nudo was killed and the Separatist Council as wiped out, Vader had activated the shut down command and de-activated all units of the Separatist Droid Army and dissolved the Confederacy thus, ending the war with both the Separatists and the Republic effectively gone. The Hyper-Communications Cartel had dissolved without its leader and its assets were annexed into the newly formed Galactic Empire. Due to Nudo's role in the conflict, he played a major role in instigating the downfall of the Republic and the rise and return of the Sith. 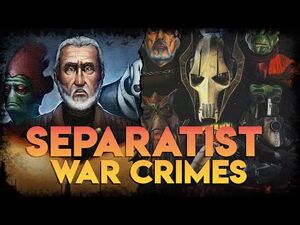 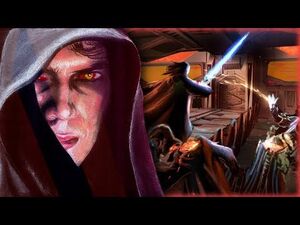