Kidnap Alex (succeeded) and sell him on the Black Market (failed).

The Poachers are minor antagonists of the 2008 film Madagascar: Escape 2 Africa. Despite their short screentime, they were behind Alex/Alekay's separation from his family years before the franchise's events.

One day in an animal reserve in Africa, 1972, Zuba the lion was teaching his son Alekay how to fight by tackling Makunga when he attempts to become Alpha Lion. Alekay was too busy watching a butterfly and soon discovers the end of a rope tied in a ball knot. Curious, Alekay approaches it, only for the rope to back away when he approaches. Alekay ends up chasing the rope until he gets to the fence boundary of the reserve. Once outside of the fence, Alekay realizes too late that the rope led to two poachers who were using it to bait him outside of the reserve. Remarking that he would be worth a few bucks, they place him in a wooden crate and drive off in their truck.

Hearing his son's cries for help, Zuba chases after the truck into a jungle beyond the reserve, eventually catching up by leaping at the truck from a hill. As Zuba tries to free Alekay, the poachers see him through the truck mirror and shoot him with a shotgun. A bullet strikes Zuba in the ear, causing him to fall off the truck. When the truck makes a sharp turn, the now unstrapped crate containing Alekay falls and lands in a river below. Once his blurred vision clears up, Zuba resumes chasing the truck, unaware that his son's crate was flowing down the river to the ocean, eventually leading Alekay to New York City where he was raised in Central Park Zoo. While Zuba soon gave up the chase, what happens to the poachers remains unknown. They have however an immense disappointment ahead of them, as Alex was never in their haulage. 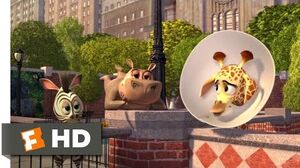