Succeed in getting Mr. Wong's magic cup before betraying him (succeeded).

Kill Din and anyone else standing in his way (failed).

Pockets is the central antagonist of Sony Pictures Animation's twenty-sixth feature film Wish Dragon. He is Din's arch-nemesis and a bounty hunter who will do anything to get what he is supposed to retrieve, later betraying his employer Mr. Wong to have the magic cup for himself.

He was voiced by Aaron Yoo.

Pockets is a thin Asian man who always has his hands in his pockets, except for the last battle. He has a bald head and a white coat.

Pockets is a self-absorbed man who would do anything to defeat his enemy. He never quits his work and always wins. He rarely takes anything comically like his comrades, barley lightens his serious facade, and above all, refuses to remove his hands from his pockets (hence his nickname), as he prefers to fight with his legs. He is immensely serious and tough, showing a dark side without missing a step and gives off an intimidating aura. He is one of the darker Sony Animation villains due to his will to actually murder both his employer AND original target (who was a teenager) in order to achieve what he wants. In the end, Pockets desired to have the Midas Touch, allowing him to turn anything into gold, but this greediness became his undoing.

Pockets is first seen walking out of a truck, along with his goons to try and find the Wish Dragon, Long. During most of the movie, Pockets is seen trying to track down Din, but never finds him.

While Din is trying to make his last wish to Long, Mr. Wong approaches to ask Din for the magic cup, with Pockets behind him. Din then runs away, with the cup, forcing Pockets to chase him. Pockets then battles him in a construction site while Mr. Wong tries to save Din. During the ensuing fight, Din gets pushed by Pockets, causing him to hit Mr. Wong and fall. Mr. Wong then holds on to a railing with the magic cup in his hand after Din accidentally dropped it. Mr. Wong pleads for Pockets to rescue him, but Pockets takes the magic cup, tossing Mr. Wong to his death. Pockets then wishes for a Midas Touch from Long while Din tries to save Mr. Wong.

Pockets, along with Tall Goon and Short Goon, then flee the scene while Din tries to save Mr. Wong. Running out of time, Din then using a crane to jump onto the floor of the truck as it slowly heads for a bridge. Pockets then tries to attack Din with his Midas Touch, but misses and ends up touching the car. Din then gets onto the roof while Pockets fights him, leaving Long to grant the Tall Goon and Short Goon wishes.

The car tires then turn into gold causing the car to drift on the bridge. Pockets and Din then fly out, holding onto Long in the process. Pockets, tossing Din away from the magic cup, making Din unable to see Long, then fight in the sky. Right before Pockets uses the Midas Touch on Din, Long interferes, being the one to turn into gold. Once Long is fully gold, Din and Pockets then start falling into the water below. While descending, Pockets accidentally touches himself, causing himself to turn into gold. While Long and Din end up hitting the water, Pockets ends up hitting the side of the bridge, shattering him into numerous gold pieces and evidentially killing him. 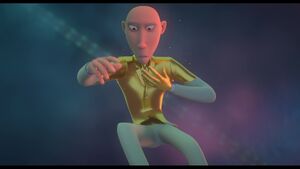 Pockets accidentally touches himself with his golden hand, turning him into a gold statue while falling 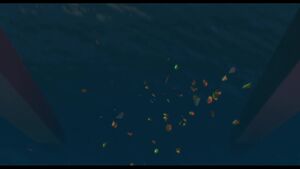 Pockets' defeat and death as his golden body shatters to pieces.