To perform tasks given to her by "Principle Taller"/Lena Luthor.

In the Reboot, she is is one of the antagonists and a student at Metropolis High & also a friend of Jessica. She was voiced by Cristina Milizia.

Reboot: Ivy's love for plants made her put their "lives" above humans. She is willing to kill anyone she considers dangerous to plants.

Ivy can cause plants of all kinds to grow at a rapid rate simply by commanding them to do so, and can manipulate and animate them as she wishes. Her knowledge of botany allows her to better manipulate her plants.

Poison Ivy is a botanist and superhero at Super Hero High. When a botched lab experiment gave this wallflower the ability to control plants, her life changed forever. Now, she is finally blossoming into her new life and doing the best she can to adapt to her amazing new superpowers.

In the film LEGO DC Super Hero Girls: Super-Villain High, Poison Ivy joins Uber High, a high-school which is secretly for super-villains and becomes one of their top agents. However, in the end, Poison Ivy rejoins Super Hero High and fights to save the day.

In #FromBattoworse: she battles Batgirl.

Poison Ivy first appears in the short "Hashtagfrownyface" where she almost tries to rule to whole high school, only for Harley to send her emoji's, much to Ivy's dismay.

In "#Frenemies", she (along with Catwoman, Harley Quinn, Star Sapphire, Giganta, and Livewire, formed a group called the Super Villain Girls.

In “Beeline”, she is one of the 5 villains to help Harley blow up the bridge so that Mr. Johnson didn’t give Harley her Math test.

In  "#Soulsisters", she has her soul sucked by Katanna. 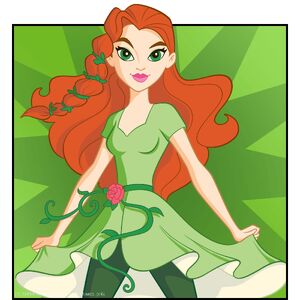 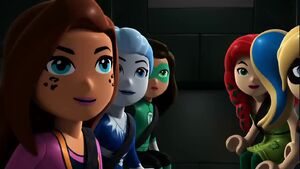 Poison Ivy preparing for a mission. 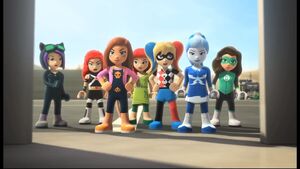 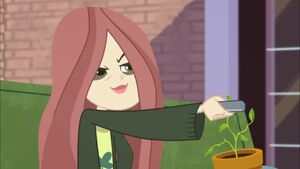 Retrieved from "https://villains.fandom.com/wiki/Poison_Ivy_(DC_Super_Hero_Girls)?oldid=3540247"
Community content is available under CC-BY-SA unless otherwise noted.