Member of The Rogues

Assist Joker in his schemes.

Poison Ivy is a minor antagonist in The LEGO Batman Movie.

She was voiced by Riki Lindhome.

Poison Ivy is a member of The Rogues, a team of Gotham's supervillains, assembled by the Joker. When he invades the Energy Facility, Ivy accompanies him and the rest of the villains and fights alongside them when Batman arrives. As he is jumping, she grabs his leg with her and vines and tries to give him a poison kiss, only for him to block it with several penguins.

Later, she is shown inside the Joker's lair with the other villains.

She accompanies Joker and the Rogue to the Gala to attack, only to be captured after Joker surrenders them, and is sent to Arkham, where she is seen many times.

The Joker manages to escape the Phantom Zone and brings back several infamous villains with him, such as Wicked Witch of the West, Sauron, Lord Voldemort, Medusa, and others. However, he decides to leave Ivy and the other Rogues imprisoned, now that he has better help. This causes Poison Ivy and her fellow villains to ally with the Batman and his team to take down their former boss. After they succeed, Ivy kisses a man in celebration, only for him to be poisoned. The Joker reconciles with The Rogues and they all leave, as Batman gives them a thirty second head start. 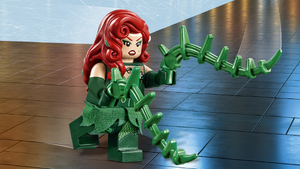 Retrieved from "https://villains.fandom.com/wiki/Poison_Ivy_(The_Lego_Batman_Movie)?oldid=3228616"
Community content is available under CC-BY-SA unless otherwise noted.