Armed with Mossberg 500 Mariner cruiser and a Beretta 92FS Inox

Participating in The Purge.

Murdering homeless people.
Disciplining his friends into being polite.

Kill James Sandin (succeeded, at the cost of his own life).

The Polite Leader is one of the two main antagonists (along with Grace Ferrin) of the sci-fi horror thriller known as the Purge.

He was portrayed by Rhys Wakefield.

Along with many other American citizens, he was eager to participate in the Purge night when it arrived. However, whereas other people had somewhat justifiable and logical reasons for desiring to kill people (ie people who had simply wronged them in their pasts) the Polite Leader was a sadistic man who delighted in first torturing, then mentally breaking, then finally killing his victims, all with a smirk on his face.

The Polite Leader is a neurotic, delusional, and pretentious individual who seeks to cleanse America of unwanted (such as the homeless) and threatens to kill the James and his entire family unless they surrender a homeless man that stumbled onto their property, he shows a perverse sense of respect for those of high social class and does not wish to kill his "own kind" if possible but has no qualms with murder and other atrocities towards the lower classes.

The Polite Leader is shown to be in a relationship with a blonde female purger wielding a bloody blade, this is proven in the scene where Charlie is checking the CCTV located on the front door.

The antics of the Polite Leader and his gang are allowed due to the dystopian rule of the annual Purge - in which (almost) every crime is legal and no emergency services are called out, part of a Social Darwinist agenda by 2022 America to get rid of the "unwanted" members of society.

The Polite Leader taunting James through his doorbell camera. 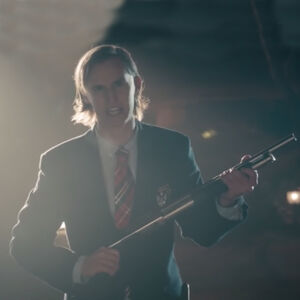 The Polite Leader is shot to death by Mary.