Offer sacrifices to Butcher and her colonies in exchange for living in peace and never going hungry.

Polk Family (also known as Polk Clan) is an evil family who appeared as the secondary antagonists of American Horror Story: Roanoke. For 200 years, the Polk family has collaborated with the Butcher and her colony. Mama Polk and her children are the last descendants of an inbred family who provide victims to the Butcher in exchange for living in peace.

Mama Polk in My Roanoke Nightmare 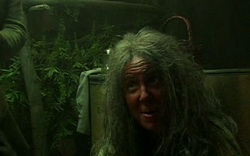 Mama Polk is the cruel matriarch of the Polk family and the secondary antagonist of Roanoke next to Thomasyn White and Scáthach. She is primarily portrayed by Robin Weigert. In her My Roanoke Nightmare (fictional documentary) appearances she is portrayed by an unnamed in-universe actress, portrayed by Frances Conroy (who also portrayed the older counterpart Moira O'Hara in Murder House).

Mama Polk is behind the kidnapping of Shelby, Matt and Flora in their flight from Roanoke House during the night of the Blood Moon. The woman welcomed the three by offering them jerky made from flesh cut from Elias Cunningham, whom they had captured after he had been shot with arrows previously that day. However, after the Millers declined her offer to eat, Mama took a bite and tossed the tray aside stating it was rotten. This may have had to do with whatever "magic" the Polk boys claimed Mama used to keep Elias alive. Unfortunately, Mama said there was no need to keep Elias alive if he was bad meat and Lot Polk beat Elias's head in with a hammer.

Since Shelby and Matt led the police and social services to remove Mama Polk's grandchildren earlier, the woman was angry with them and was willing to deliver them directly into the hands of the Butcher. After attempting to escape, Mama Polk, knowing Scáthach wanted Matt unharmed, breaks Shelby's ankle with a hammer to avenge the death of her son Cain, who was killed by Matt with a shotgun. The woman is then briefly comforted for her recent loss by Thomasin White before returning to one of their houses having accomplished her task to deliver sacrifices to the Lost Colony.

Ishmael Polk in My Roanoke Nightmare 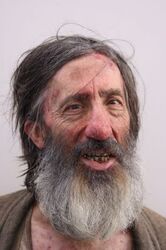 Ishmael Polk is Mama Polk's husband and father of Cain, Lot and Jether. He is primarily portrayed by Frank Collison. In My Roanoke Nightmare, he is portrayed by an unnamed in-universe actor, portrayed by Grady Lee Richmond. 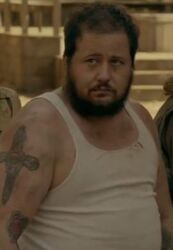 Lot in My Roanoke Nightmare 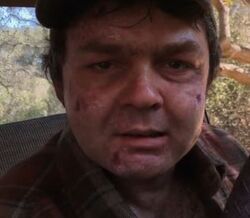 Lot Polk is one of the three children of Mama Polk and Ishmael Polk. He and his family live a cannibalistic lifestyle along with being a part of a long line of inbreeding. He is primarily portrayed Frederick Koehler. In My Roanoke Nightmare, he is portrayed by an unnamed in-universe actor, portrayed by Chaz Bono.

Cain Polk is one of the three children of Mama Polk and Ishmael Polk. In My Roanoke Nightmare, he is portrayed by Orson Chaplin. The real Cain was killed by Matt, according to the documentary. Therefore, he did not make an appearance after Chapter 6.

Being the only Polk Family member who was not introduced in My Roanoke Nightmare, Jether Polk is one of the three children of Mama Polk and Ishmael Polk, portrayed by Finn Wittrock who also portrayed Dandy Mott in Freak Show. He is perhaps the least cruel family member compared to his parents and brothers.

Among his relatives, Jether is the one who seems to feel a kind of empathy toward other human beings, perhaps due to the fact that he has never killed any person. Jether is obsessed with video recordings and is addicted to cocaine. He often uses videos recorded by him to masturbate. By his own admission he feels stuck in the middle: not old enough to go to bed with Mama Polk, nor young enough to be cuddled like a child. He dreams of becoming famous, although his total lack of self-esteem and submission to Mama Polk make Jether an inept. Unlike his brothers, Jether seems to be slightly more alert, still showing some deficits. Jether has an emaciated body due to poor living conditions, covered with scabs and dirt. His face is partially ruined and his clothes are dirty and crumpled.

Jether's interest grows especially toward Lee when Mama Polk entrusts him the task of watching her. The two have fleeting discussions, sufficient to Lee to instill confusion in Jether, making him doubt his loyalty to the family that treats him as an inept. In fact, Jether reveals to her to feel excluded for not having a counterpart in "My Roanoke Nightmare" and dreams of becoming famous, even though he will never be as famous as Kinclaid Polk, an ancestor of him who emulating the ghost of Piggy Man, killed several people wearing a pig's head so giving way to an urban legend. Jether then reveals that he never killed a person, and that Lee will be his first human victim. Between several tortures inflicted on Lee by Mama Polk with the help of Jether, the two continue to talk so that Lee can find a way to escape. Aroused, Jether offers part of his cocaine to his hostage and starts to touch himself explicitly. In order to break free, Lee seduces Jether touching his private parts before choking him with one arm and, finally, kills him with a knife in his neck.

So far, several promo trailers of season 6 had somehow hinted the presence and nature of Polk Family. Here is some notable trailers: