Uses a device called a Controller Belt that controls all of the dots on his suit and holds a universal controller.

Has getaway vehicles that include a flying polka dot and a large floating sphere. These are concealed in the dots on his costume.
Is able to keep his dots inert and are connected by wiring in his costume.
Can remove his dots and once removed they activate and enlarge in size and become various devices (buzz-saws dots, flare dots, and teleportation devices as examples).

Commit crimes based on spots and dots in Gotham City.

Defeat Batman and Robin.
Defeat Nightwing and Batgirl (both failed).

Abner Krill, better known as Polka Dot Man or Mister Polka-Dot is an antagonist in the DC Comics universe and is an enemy of Batman, Robin, Nightwing, and Batgirl.

Abner Krill decided, for reasons unknown, to launch a crime wave based on spots and dots in Gotham City, where he inevitably came into conflict with Batman and Robin, the city's masked protectors. As Polka Dot Man, he wore a bizarre costume covered in spots, the point of which soon became apparent. Once removed from the costume, the spots could be used for a variety of purposes, creating deadly weapons and a bizarre escape vehicle. Perhaps surprisingly, he succeeded in capturing Robin, but Batman was nonetheless able to save his crime fighting partner and bring Krill's crime spree to an end. He later battled Nightwing and Batgirl but was defeated.

Polka Dot Man returned some years later, undaunted, yet also lacking his gimmicks, with the spots on his costume merely decorative. Using a baseball bat, he assaulted Officer Foley of the Gotham City Police Department, causing him very minor injuries. He was then beaten badly by Harvey Bullock, who was sick of costumed villains in the city. The assault put the Polka Dot Man (as he now styled himself) in traction, and he filed a brutality suit against the police department which resulted in Bullock being forced to see a psychiatrist for some time.

Polka Dot Man later became a member of a group of second-rate villains that worked for General Immortus. Immortus, with the help of Professor Milo, upgraded the villains powers and gadgets. The group was undone when they were betrayed by Human Flame. Most were killed in the brutal battle, including Mister Polka-Dot. His head was squished after a manhole cover landed on him during the battle against Human Flame and Seductress.

Polka Dot Man appears as a villain in the LEGO Batman Movie.

In the upcoming DC Extended Universe film The Suicide Squad, Polka Dot Man will appear as a protagonist. He will be portrayed by David Dastmalchian, who also played Thomas Schiff in The Dark Knight, Murdoc in MacGyver, Dwight Pollard in Gotham and Abra Kadabra in The Flash.

Polka-Dot Man appears in the Batman the Brave and the Bold TV series. He first appears in the episode "Legend of the Dark Mite" as an illusion that Bat-Mite fights when he becomes Batman. Polka-Dot Man is defeated when the real Batman jumps in three dots in this uniform, causing him to "TILT" like a pinball machine and shut down. He later reappears in "A Bat Divided!" playing billiards against the Zodiac Master and Zebra-Man at a shady Gotham City "8 Bar", a known haunt for third-rate costumed villains, which is soon crashed by three atomic counterparts of Batman and Firestorm. He also makes cameo appearances in "Mayhem of the Music Meister!", "Joker: The Vile and the Villainous" and in "Mitefall".

Polka-Dot Man appears as a playable character in both LEGO Batman 3: Beyond Gotham and LEGO DC Super-Villains. 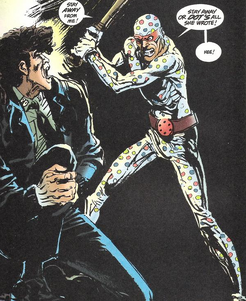 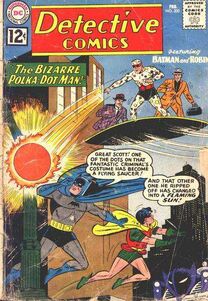 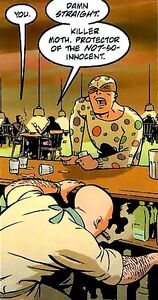 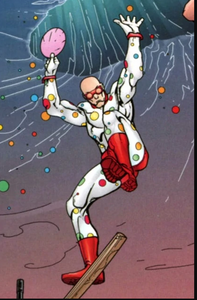 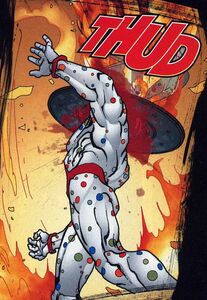 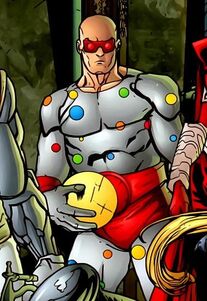 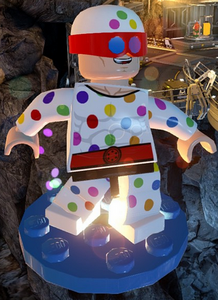 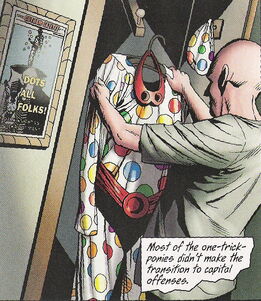 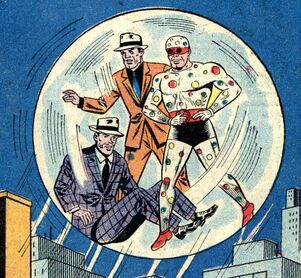 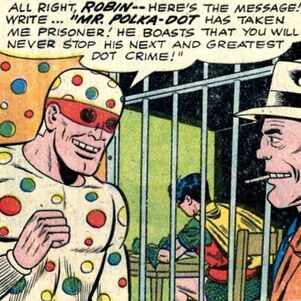 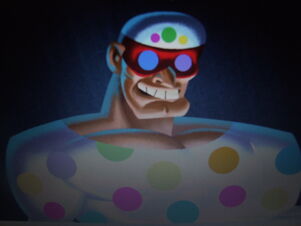 Polka Dot Man's appearance in Batman: The Brave and the Bold. 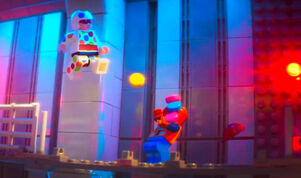 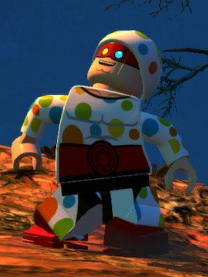 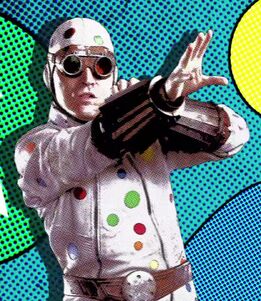 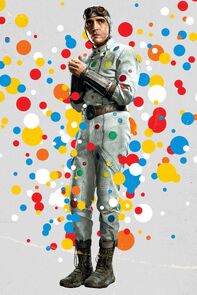 Retrieved from "https://villains.fandom.com/wiki/Polka_Dot_Man?oldid=4271064"
Community content is available under CC-BY-SA unless otherwise noted.