Guardians of the Oracle

Using the Amulet of Uroborus.

Keep the Oracle from telling the Olympians about the Furies plan.

Pollux and Castor are major antagonists in 2013 the video game; God of War: Ascension. They are siamese twin brothers that live in the temple of the Oracle "protect" the Oracle, and encountered Kratos on his journey to free himself of his oath from Ares.

Shortly after the Furies captured Orkos and the Orcale, Alethia, and had her eyes ripped out, it's likely that Pollux and Castor were assigned, and presumably forced, to keep an eye on Alethia.

When Kratos reached the Temple of Delphi, he spotted Castor killing one of his slaves simply because he talked out of terms. After he assigned another slave to finish the statue, Castor desended to the bottom of the temple to continue to "protect" the Oracle, while at the same time calling the slaves a useless lot.

When Kratos managed to descend to the bottom of the temple, Castor immediately thought that Kratos was planning to place some kind of offerings to the Oracle. But Kratos refused, walked by Castor and proceeded to head towards the Oracle. Enraged, Castor sent a couple of his slaves to kill Kratos.

However, the slaves cowered and ran away. Disappointed on how useless the slaves were, Castor, along with his siamese brother, Pollux decided to confront Kratos personally. But before that, they both used their amulet, known as the Amulet of Uroboros, to reverse Castor's youth to do battle.

Kratos chases them throughout the temple, while Pollux and Castor were decaying the floor underneath Kratos. After awhile, the three reached a small battle arena. During the fight Kratos managed knock out Castor, so Pollux took control of his brother's body and continued to fight Kratos.

Believing that they were going to be defeated, Pollux used his Amulet to decay the ground underneath the Oracle, causing her to fall to her attempted death. He even attempted to finish Kratos, and themselves by destroying the ground below them.

But Kratos managed to stun Pollux and defeats both of them, by having Castor fall to his death, and ripping off Pollux off of Castor's body. When all three of them reached the ground, a weakened Pollux attempted to reach his dead brother's body, knowing he can't defend himself without his brother's body.

But Kratos caught up and proceeded by crushing Pollux's skull being underneath the Spartan's boot, killing Pollux. After the death of Pollux and Castor, Kratos acquired the Amulet of Uroborus.

Castor takes role as a prophet in the temple, he is cruel, harsh, and snobbish. He shows these traits by ordering his slaves to build statues of him and even killing any who step out of line, even questioning him is enough reason to be killed as he stabs one of the slaves in the face when he expresses his concerns about his brethren's health. He also consider human to be vile and disgusted creatures.

Pollux is considered to be the divine half of the gemini twins, though he appears as the shriveled conjoined brother.

Being a Demi-God, Pollux and Castor have enhanced strength, endurance, and agility. Both of them also have the ability to decay or heal items over time. Being that Pollux is a sorcerer, He also has the ability to control his brother Castor's body if he's killed or knocked out. They can teleport over distances, move objects with their minds, fly, shoot energy bolts and manipulate the flow of time, using this to deage themselves. Castor is the fighter of the duo. He mostly relies on using a staff that can turn in either a sword, spear, or club for combat. 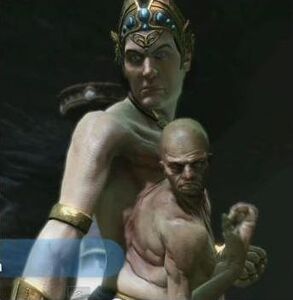